Suddenly the blog is a big hit in Poland. Or, to be strictly accurate, one post is.

Since yesterday evening, a four-year-old entry featuring a melanistic great tit snapped through the living room window has been viewed twelve times, first in Bialystok via a Google search, then via Facebook. I like to think that one of The Producers was so taken with the image that he put it on social media for all his chums to enjoy.

As none of them have contacted me, the mystery of their interest will remain just another interweb riddle. 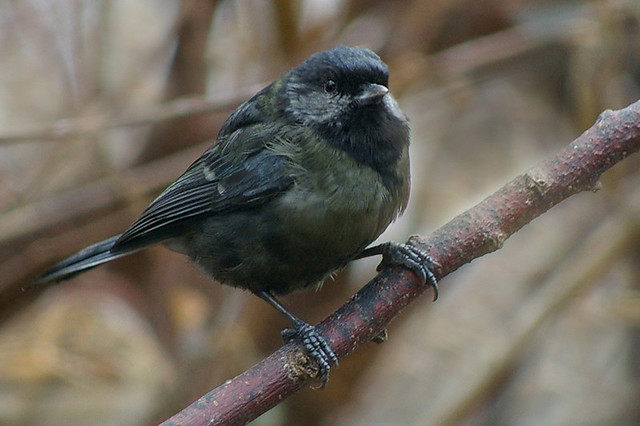 Today’s run – number 2 of Week 3 – was possibly the coldest yet. The Garmin said it was 6.1ºC but the Garmin lied. The temperature was distinctly sub zero, confirmed by the frozen puddles at the bottom of the lane that have been unchanged all week.

For the first time I donned gloves and an extra shirt. I would also have taken Matchgirl’s headband with built-in earflaps were she not too fastidious to allow my sweat to impregnate it. Fortunately, thanks to not a breath of wind, I didn’t need her sporting gear.

This was supposed to be a 45-minute canter, with five-minute walks front and back, but the Garmin also lied about my initial pace, which it alleged was between four and seven minutes a mile. By the time it had settled down I’d set off at more than a canter but less than a gallop.

Subsequent miles were more controlled and I finished after four non-stop miles – my best continuous run yet – in 46:10. I don’t expect to complete the whole marathon at the trot (the look Matchgirl gave me when I asked about pacemakers was one that only a wife can give). Some walking will be involved, or even a complete walk/run strategy, but it’s an encouraging sign that my stamina is growing.

After all, it’s only ninety-nine days to the big one.

Ultra Marathon Update: Matchgirl, who’s moving on to bigger things, has her first ultra marathon starting place confirmed – a 50k warm up at the end of March before the 100k London to Brighton run at the end of May. To chronicle her efforts she’s resurrected her running blog. You’ll find it at https://matchgirlsblog.blogspot.co.uk/