Speeding Through The Snow

Week 2 of Inverness Half Marathon training began on Monday despite the snow. There wasn’t much but it was an excuse to don the Saucony trail shoes bought for my covid-hit Dava 50k attempt in 2021 and never used. Also worn were a long-sleeved shirt and a windproof hoodie, plus gloves, tights and hat, which meant the cold didn’t bother me at all for 40 minutes of steady running. Who says I’m a fair weather runner?

Overnight, proper snow fell. Maybe not as proper as on the higher ground, where roads were blocked by almost a foot of white, but we had a good 2-3 inches. The cats were not impressed and stayed home. I, on the other hand, thought I’d make the most of it and brought forward the run I should have done today. Who knows how bad the weather would be? Sunny, thawing and decent as it’s turned out.

The Sauconys were donned again and confirmed my opinion that they’re a tad tighter on the toes than my usual Brooks. Toe guards will be needed for longer distances but I coped fine with 45mins easy on clear roads, then along tyre tracks on a side road, then briefly on untouched snow before retracing my steps back home. Another successful run. It would have been much less fun if there’d been a frosty wind. 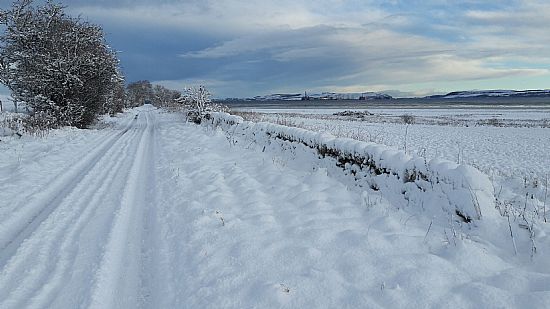 On the road to Newhall Point.

So today’s much less active, although I might be tempted by a short walk to keep the legs moving and check out how icy or not the roads are. Spring’s not far away and we athletes need to be ready.