It's the saddest time of the year. The Christmas cards will disappear from the mantelpiece tomorrow; City Limits' festive gig glut is over, with our next scheduled appearance not until the end of the month; Matchgirl is preparing, with no enthusiasm whatsoever, for her return to the office next week. And The Pride is bored.

I'll also have to get down to the work I've been putting off – some domestic, some business – but there should still be time to resume some long-neglected bird snappery (when I've cleaned the windows so I can properly see our avian friends). I deserve a few decent pictures after all the money spent on seed and nuts. The feeders need replacing too – birds are almost as expensive as cats.

Speaking of cats, you've never heard noise until three of them realise you've opened a pot of smoked salmon pate and jump to the wrong conclusion. Soft-hearted Matchgirl ensured there was a good taste left for the yowling trio.

There are not even any holidays to look forward to, for Matchgirl has no exotic runs planned and PhotoActive Philip has run his last Spanish Snappery Fiesta, so I've no excitement on the horizon either. Which meant I had mixed feelings when Philip emailed two formerly lost snaps from last May's Fiesta, one featuring me with Carmen, one of the waiting staff. 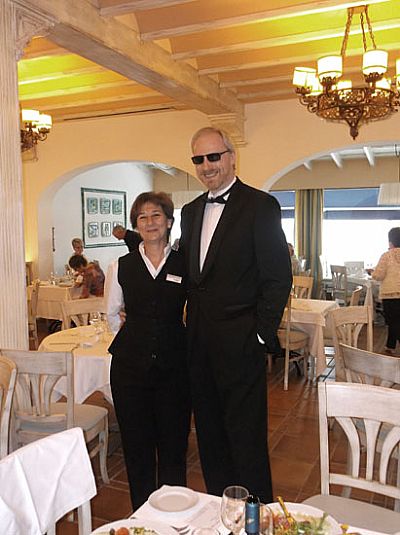 The DJ will get another rare outing in February when Matchgirl accompanies me and some of the Chatterbox staff to the Press Ball, when we'll discover of the Black Isle's favourite read is Community Magazine of the Year. My better half has, of course, not got a thing to wear...