Last night's second evening at Johnny Foxes found City Limits at its most technically proficient so far (although I did manage to botch the key change in Livin' on a Prayer for the first time – I blame the acoustics). Even better, there was a good crowd to see us, most of whom stuck around to dance, sing and ask for songs we don't play. Who knew that the Bay City Rollers still had fans?

Crowd pester power can be an overwhelming force. Somehow, Sweet Home Alabama has crept into the set (sigh), although we swerved a desperate request for The Gambler. We won't sink that low (I hope). How every new generation comes to know and love these dirges is a mystery.

The night was also notable for the crowd's rendition of Happy Birthday to our child star, Ashley, who turned twenty-five at midnight. She'd already been the centre of much male attention thanks to the reappearance of her leather hotpants. The only guys to show no interest were too busy following Keith's guitar heroics. Mike and I lurked in the background – the rhythm section knows its place.

There are no gigs next weekend, which is a blow – the recent glut has brought in some welcome income – but there's rumours of a first full rehearsal instead. 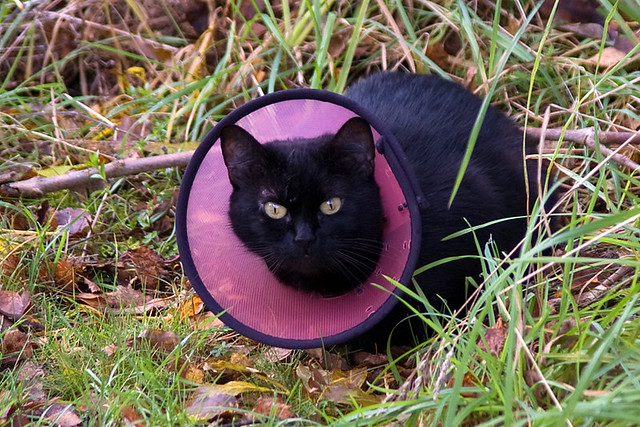 Matchgirl has yet to see the band, most start times being inconveniently close to her bedtime. There are also feline considerations. Maia the self-harming Emo cat's still not been restored to full health, despite medication, the cone of shame and consultations with Dr Vet and Dr Google, so an eye must be kept on her. We'll continue to do our best. Poor puss.

Comment from Cathy at 08:20 on 05 January 2015.
A pink cone of shame - why am I not surprised!? And as for the Bay City Rollers - they feature more than once on my gym iPod playlist, I'd have you know! Nothing better for singing along to (in my head) and helping the treadmill minutes pass more quickly. :-)
Comment from Russell at 09:52 on 05 January 2015.
So which Rollers song would you like to hear live?