Trains And Boats And Planes

A busy few days began on Saturday when I activated my ScotRail Club50 £17 return ticket to anywhere in Scotland and travelled to Gourock via Inverness and Glasgow, which involved a short stroll from Queen Street to Central stations, dodging the crowds and beggars who ranged from scruffy junkies to suspiciously smart and smiley young women. I’m definitely a country mouse now.

The carriages were mostly comfortable, the free wifi worked, and there were seats for everyone – just as well because the reserved seats were not allocated, despite my ticket. The same thing occurred on the way back.

“But why Gourock?” you ask. It may be a fine Clydeside town but the big attraction was the shabby passenger ferry that for just £2.50 took me across the river to Kilcreggan where I stayed for two nights with old friends Mike and Michelle. Much eating, drinking and gossiping ensued – so much that the Pentax made only a brief appearance, to capture a snap of distant Gourock that through the wonder of Photoshop I turned into an aged postcard. 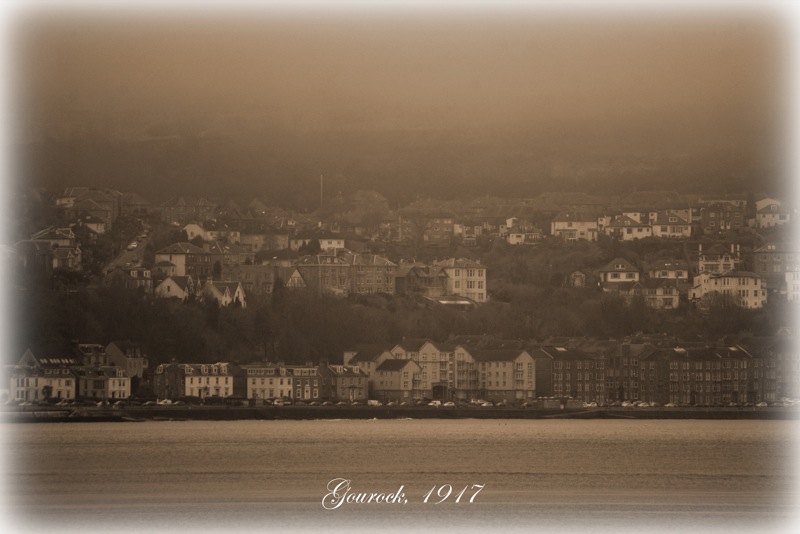 I returned on Monday, carelessly leaving behind the MacBook charger which arrived at The Rural Retreat today in the same postal delivery as the emergency back-up purchased through eBay. The MacBook could be used only sparingly for two days – I won’t be caught out again.

Now all is quiet (apart from hungry cats) because The Barking One has departed for her running holiday (an oxymoron, but we’ll let it pass) and tomorrow flies to the Algarve. With luck, some Iberian warmth will cure her cough.