Another gig, another line-up. Drummer Sam's currently swanning around Denmark so we called in an unrehearsed, last-minute substitute to play at last night's gig in The Bandstand Bar in Nairn – Andrew, who's part of Dark Horse, the band to which Ashley will shortly devote all her musical energy. Rock is a close-knit community.

He fitted in well, the only disaster being the intro to Sex On Fire, something we're quite capable of messing up even without a first-time drummer, but we stumbled on and all was fine by the end of the song. Praise was heaped on us after the gig by some of the disappointingly small number of dancers (the room itself was busy enough), which proves that as long as it's having a good time the audience will overlook anything.

The evening was also notable for the appearance in the audience of singer-to-be Jenna and her boyfriend, whose name I've either forgotten or never caught. She's eager to start, which is just as well. Last night was Ashley's final gig as an official band member. Next weekend the trio is in action at the King Haakon Bar in Kyleakin and two weeks after that Jenna will make her band debut in the two-night-stand at Johnny Foxes.

There's a complication, of course. The second Foxes night clashes with a solo booking of Jenna's, so it's not impossible that Ashley will return as a stand-in, or maybe the trio will make its first appearance there. Who knows.

What's certain is that Ashley won't be available for emergency cover for much longer, and not just because of Dark Horse. The reason is secret until Monday… 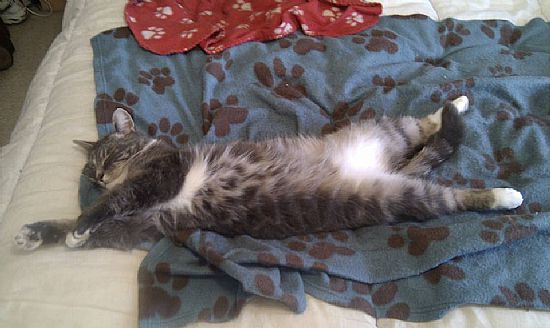 Feline Update: Pandora may sometimes be at the wrong end of Maia's short temper but the rest of the time she's a relaxed and confident cat, as proved by Matchgirl's snap taken yesterday of a moggy at ease on the bed. Everybody say ahhhh.