Every home should have one

Monday was the day that phase one of The Rural Retreat's stealthy makeover was completed: the installation of its gleaming new fireplace.

I’d been told to expect our nominated heating operative to arrive on the Black Isle at “tenish”. He knocked on the door at ten forty-fiveish, which wasn’t too bad, particularly as he straight away set about covering carpets and furniture in the immediate vicinity of the existing fireplace with grubby blankets, old curtains and plastic sheets.

After fortifying himself with a mug of tea he powered up a savage cutting implement with which he cleft in twain the Caithness Stone hearth, apparently to permit heat expansion. The task took two minutes, at the end of which I could barely see him through the fog of stone dust that filled the confined interior of the Retreat’s open plan ground floor space. It’s fortunate that Matchgirl was away pursuing business interests on Skye.

When the dust had settled a little he brought in the main frame of the new fireplace, used it to mark out his next task, then produced some specimen of power-chisel and blasted out enough brickwork to leave the desired size of hole. More dust flew. More dust settled.

A metal bar was put in position, two bricks replaced and quick-drying cement applied. While it lived up to its name he retired to his van for a lunch and phone call break.

Refreshed, he returned thirty minutes later to screw the fireback on to the cast iron main frame, place them in position and secure them to the wall after ensuring a perfect fit by use of the angle grinder on the back of the frame. The noise was horrendous, the sparks impressive and the timing unfortunate.

Bess, who’d fled to the bedroom when the tradesman entered her territory, had chosen that moment to descend the stairs. The petrified puss has never moved so fast before; if she’d missed the cat-flap in her bid to escape, a moggy-shaped cartoon hole would certainly have appeared in the door beside it.

However, the worst was now over. The remaining tasks were soon completed, the covers removed from furniture and carpets (more dust flew; more dust settled), the grate and guard put in position and the hearth wiped down. Job done. The worker went on his way and The Rural Retreat was left with a new focal point to add even more character to its rustic interior – a traditional Victorian-style fireplace. That’s made in China.

The dust was allowed to rest overnight; Bess, who hates the vacuum cleaner, had suffered enough trauma for one day.

My plan was to welcome Matchgirl home from Skye with a cheerful blaze. Unfortunately the tradesman’s parting words were a warning that a fire shouldn’t be lit for three days, and the first should be a small one. As we’re to head south today that means we won’t be able to make use of our new heating facility until Monday, unless last week’s heatwave makes an unexpected return and the ceremonial conflagration is further delayed.

This may be the first time that bad weather won’t be totally unwelcomed by the residents of the Retreat. 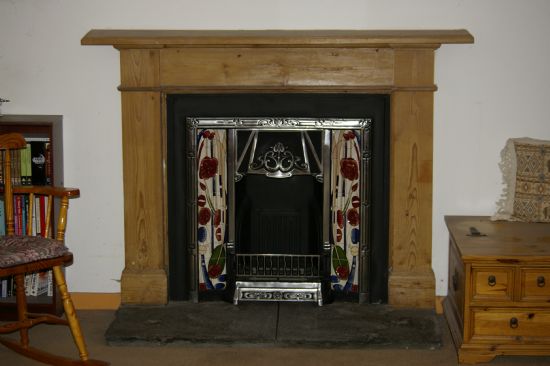