Kittenkind took a great leap forward today when the cat-flap, boarded up for the past six months, was revealed to curious feline gaze. And caution.

Maia, unsurprisingly, loitered in the distance, watching but not participating. The Fearless Ones took a more active interest but neither dived through the kitty door and into the great wide world, as I'd expected, even after the flap had been demonstrated several times.

Willow was the first to exit, through a flap held open by Matchgirl; Pandora needed similar assurance; neither would return without the help of a flap-holder. We'll persevere. Chances are that by the end of the week we'll be fed up of the sound of a swinging cat-flap. 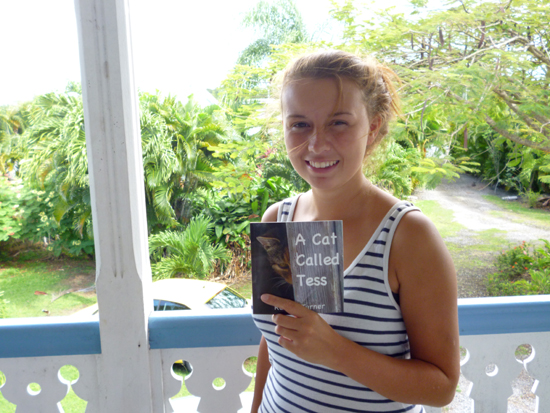 Memories of our former feline resident were refreshed yesterday by the arrival of a snap from Martinique sent by Lara, an assistant primary teacher there, and daughter of friend Patrick. A Cat Called Tess will soon help young pupils with their lessons.

If anyone else has pictures of Tess in an exotic or interesting place, please share them.

Snappery Update: The last round of competition in the Dingwall Camera Club season took place yesterday, when my decision to show only snaps taken last month backfired badly. I blame the judge, who believed image sharpness to be more important than atmosphere. There's no accounting for judges.