Matchgirl flew home from Shetland yesterday; today she was wishing she was back there after a severe attack of FAD. That's Feline Anxiety Disorder.

The outbreak was unexpected, for last night The Fearless Ones joined us and Maia on our bed (this was unplanned) where they spent a quiet, restful night and were little moggy angels. They even allowed us to rise at our usual time rather than demand food at 4am as Tess would have done. 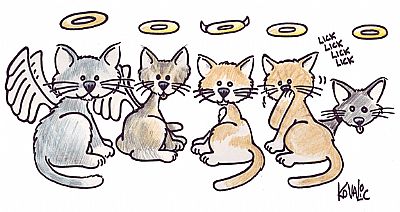 All changed this morning when Matchgirl accompanied The Pride into the garden for some fresh air and exercise. The initial bringer of stress was Maia, freed from her collar, who took the opportunity to hide under a bush and have a good scratch.

While Matchgirl attempted to entice The Emo Cat back on to the lawn before self-harm got out of hand, The Fearless Ones left their favoured lurking place beneath the bird feeders and wandered down to the bottom of the garden – close enough to the road to give her apoplexy, especially when Pandora took an interest in a Tesco delivery van then weighed up the pros and cons of a dash into a nearby field.

A gibbering carer was eventually able to return them to the safety of The Rural Retreat. She resisted the gin bottle, which was impressive.

I encountered evidence of little moggy devils when I discovered the strap on my Pentax had suffered a severe chewing. The Fearless Ones are about the age when milk teeth are replaced by their adult set, so more random chomping is expected. I can hardly wait.