A Wildcat in the Woods

Humbled by the continuing success of the artist formerly known as Dolphin James Marten James No-marten James (more of whom later), two days ago I left egg, peanuts, peanut butter and honey in a photogenic woodland location close to The Rural Retreat.

Yesterday morning the nuts remained but all else was gone except the eggshell. I'd knocked a hole in the egg to discourage diners from carrying it off; this had clearly worked, for the empty shell hadn't moved. Most mysterious.

More bait was laid and the Bushnell left to stand guard.

I returned late in the afternoon. It's fortunate that my footfall was soft, for the hungry beast had arrived just before me and didn't notice my interest as it sniffed around, jumped on to the log and delicately lapped the egg out of the shell.

It was a wildcat.

Or, more truthfully, a wild cat – for this was more moggy than Highland Tiger. In fact, it was most likely an adventurous pet taking a walk on the wild side.

It noticed me after a while, tried a staring match, then ran away. So much for my hopes of capturing something exotic on camera. I presume that birds ate the peanut butter and the honey evaporated.

I was lucky it wasn't a real wildcat for the Bushnell failed to take more than a couple of snaps, neither of which are interesting enough to share. This was final proof that, after less than a week, new batteries were needed.

The maker recommends Energizer Lithium, but all I had handy when I received my gift (batteries not included) were lower-grade Energizers. That, combined with The Night Of Memory Card Overload, explains the disappointing results I've had for the past couple of sessions.

So today I invested £14 in eight new AA batteries, which the handbook claims will last for up to a year, although probably not if the Bushnell snaps away every twenty seconds from 10pm to 4am. Its poorly performance means that the most recent night-time snap is from a couple of days ago, and in low resolution because I'd experimented with 3MP images instead of 8MP. However, as it shows pine marten and hedgehog in harmony it was worth keeping.

Much better wildlife snappery is being produced by the man now known as Squirrel James (or Red James or even Seumas Ruairidh – I'll let him choose). He's abandoned his camera trap in favour of personal attendance and caught some great shots, including this one. I'm not jealous at all. 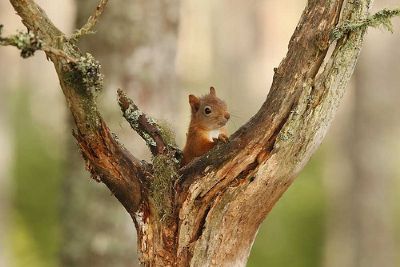 Comment from James at 18:47 on 27 August 2011.
You'll get some shots like this too. No squirrels today, just two friendly hounds running free in the forest.