Today has not been a good day for Matchgirl the gadget geek.

Two days ago, after months of umming and ahhing, she paid a deposit and signed on the dotted line to secure one of the first 4G iPhones in the Highlands – something that would make her life complete. Delivery was expected next week. 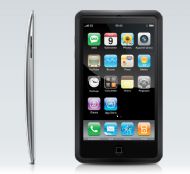 This morning the BBC website reported that the joy of hundreds of new owners, who'd picked up their new toy yesterday, had been soured by the discovery that if they held it in a certain way the signal died.

“Then don't hold it that way,” they were told by Apple supremo Steve Jobs, who went to the same PR school as BP's head honcho.

She'd already had second thoughts about her prospective purchase since discovering that 3 offered a better deal than Orange, her chosen provider. Luckily was able to get out of it, and even get her deposit back, but she still plans to get an iPhone soon.

Maybe Apple will have sorted out their phone by then.

Pine Marten Update: I moved the garden gate today in a bid to get new photographic angles on our visitors. The end of the gate is now about four feet from the window, and a buttercup patch which would make a picturesque backdrop for a dining marten is now unobscured.

By the time Miss Marten arrived it was too dark to make use of the new snappery set-up, but Matchgirl, Spider and I got a superb close-up view of a wild creature who showed no concern at all that we were almost within touching distance – so close that I was unable to zoom out the Pentax  far enough to get all of her body in the viewfinder.

She didn't notice the goodies left in the buttercup patch but with luck she'll stumble across them during the night.

The new gate position also allowed me to get a very close look at the juvenile woodpecker who perched there for a few moments. Frustratingly, a change of tripod for improved marten snappery meant I couldn't get a picture. Such is life.