Five Years On The Run

That’s my fifth running year completed: 1,000 miles, medals for three marathons, three 10ks and one half marathon, and my first (and hopefully last) bout of injury, which cost me two other races and is my excuse for dismal times in three of the races I did do. I’ve no excuse for the others apart from inconsistent training during injury recovery. Or lack of ability.

But that’s behind me; the ankles are now at 95%, and improving, and only the icy conditions are holding me back. With luck they’ll soon be over and I can get down to serious preparation for 2023’s challenges – or as serious as I can manage, anyway. The schedule already features eight events, ranging from 10k to 100k, plus a few more pencilled in if finance and band commitments allow.

Shockingly, virtual London, in April, is the only marathon in the diary, which will be completed as a training run for Race to the Stones. There’ll be some stiff climbs, an as yet unbought ultrarunner vest to test, three aid station breaks to try proper ultrarunner food (menu still to be decided), and no thought of PBs. That means I’ll probably complete it faster than any of this year’s marathons, although that’s quite a low bar to clear. 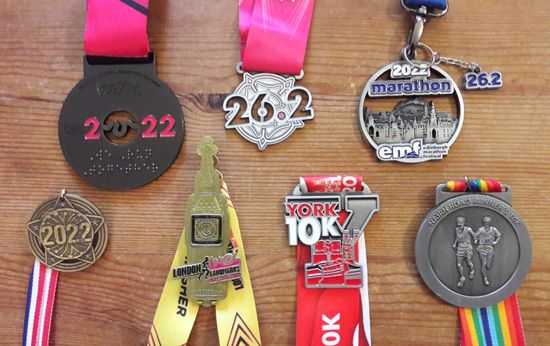 News last night of a cancelled wedding in May, blamed on the rising cost of living, found me with an unexpectedly free weekend which coincides with the inaugural Rob Burrow Marathon in Leeds. There’s also a half marathon. I briefly considered both but logistics (ie cats – Matchgirl’s in Shetland that weekend) and the RTTS training programme mean I’m unlikely to make the trip, much as I’d have liked to be part of the event. If I do a real marathon next year, to take advantage of all the ultrarunner fitness I’ll build up (I can dream), it’s most likely to be the conveniently located Loch Ness.

I’d hoped to do a Hogmanay and/or New Year’s Day run but black ice abounds so it might be a few days before 2023 running begins. I’ve a 10k booked for Loch Morlich next Saturday, although that’s always been weather-dependent. The RTTS/Inverness HM programme begins on January 10. I’ll keep my fingers crossed.