This was the marathon where time didn’t matter. Matchgirl was using it as a training run ahead of the Dava 50k next month; I was taking it easy after running in London a mere two weeks earlier. We’d cruise around together at a gentle pace and finish fresh and smiling. That was the plan, anyway.

Our scheme involved running the first three miles, to loosen up, then switching to a 4:30/0:30 run/walk. We knew there would be 5:00 and 5:30 pacers so we plumped for the latter until the unexpected arrival of a 5:15 pacer. That would be perfect: 12min/mile easy running, I’d beat my Yorkshire PB and get my fastest marathon time this year. In theory.

All began well. We crossed the start line only ten minutes behind the elites – in London I was more than an hour behind – and settled into a comfortable pace just behind the pacer. Matchgirl got carried away a couple of times, especially around the Minster, and had to slow down while we caught up. All was still well.

At three miles we stopped for a moment while Matchgirl readjusted a troublesome hip, then set off again on the run/walk. The pacer was still in sight; slowly we reeled her in but hadn’t quite caught her at eight miles when Matchgirl diverted to a portaloo and urged me to keep going. Maybe I should have stayed with her – she was off the road for only two minutes, I learned later – but kept run/walking and at 10 miles I was within touching distance of the pacer. The legs felt good but the bladder didn’t so I dodged behind a handy bush and let her go again.

More run/walking, still comfortable, and the halfway point reached in around 2:37, which was bang on pace. Shortly after that came the brief out-and-back at Stamford Bridge, where I crossed the 5:15 pacer, maybe two minutes ahead of me. No distance at all. And coming back out, I crossed Matchgirl, maybe five minutes behind me. We shared a high five, both looking good.

And then came the section I’d been dreading: the shallow but seemingly never-ending three-mile incline towards the turnaround at Dunnington, accompanied by a biting headwind that blew away the mild, comfortable conditions we’d enjoyed so far. The disappearance of all tree and building cover didn’t help either.

This was the section where I’d suffered IT band breakdown during the non-stop-rain-afflicted 2018 event, so my memories weren’t positive. I’d done marginally better in 2019 but still suffered after 15 miles. Before the day I’d told myself not to be a wuss, that there were only a couple of hard miles before the turnaround so what was the problem? But like a horse who’s stalled twice at the same fence, by now it was in my head.

I walked for a few minutes after 15 miles, and for a bit longer after 16, both times taking the opportunity to chat with the similarly challenged. This can be a mistake because I neglected to slurp Tailwind (I’d given the Camelbak a reprieve) during the r/w walks. Proper run/walk resumed at Mile 17, although I had a good excuse for a brief break around 15 minutes later when Matchgirl and I crossed again and we stopped to swap stories. Despite having fallen a little further behind me she looked much fresher and I’d no doubt that she’d catch me before the finish, especially as more walking took place.

The torture eased when the spur ended and the route passed through Holtby with a mere 10k to go. That’s an hour, more or less, on most days, although not after more than 4:10 hours of effort. I walked most of Mile 20 but managed to pick it up after that with a walk/shuffle. The miles meandered by, more chats were had and Tailwind neglected: two birthday runners, some first-timers, a gang from the north-east; no-one was doing it for the second time, although I know lots of runners make the pilgrimage every year.

At last, after 26 miles, it was time to face the brief but brutal climb up Green Dykes Lane (I walked, unlike last year when I breezed up it at the end of the 10 Mile race) then the welcome downhill to the finish where I stopped a few yards short of the end so I could do the Morecambe and Wise dance over the finish line. I’d promised Matchgirl. Sadly, there’s no photographic evidence.

My chip time of 5:43:08 was faster than my first Yorkshire and slower than my second. Considering I’d run London two weeks before, and only three minutes quicker, I’m not too disappointed. My 4:37 PB looks safe for a long time yet.

My previous two medals were chunky and substantial. Last year’s, which I missed because of covid, was the best yet. This year’s teeny offering looked like a virtual medal for which the specs had been submitted in inches and made in centimetres: a poor reward after 26.2 miles. 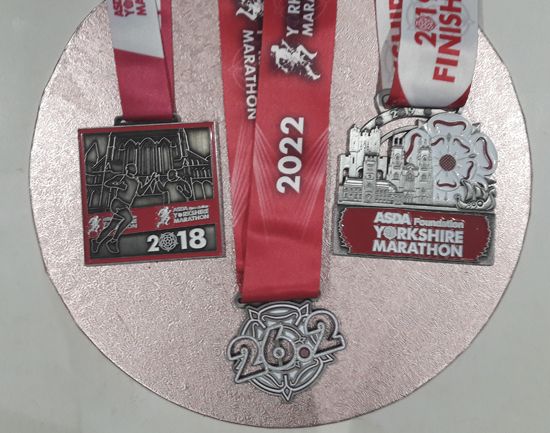 Matchgirl hadn’t caught me, which was explained when I checked my phone. Shortly after our paths crossed for the last time she’d hooked up with a struggling young first-timer and stayed with her to the end. What a star, and now a young girl’s heroine. And still only 20 minutes behind me.

The one-mile walk back to our Airbnb (The Tannery on Lawrence Street – highly recommended) helped ease the legs, as did the shower that followed. Unfortunately, the pub across the road which our Airbnb host (who’d left us post-race plasters and stretching mats in case we needed them) had recommended had run out of food an hour early. There must have been a lot of hungry runners in town. We settled for a Chinese takeaway and the Strictly results on catch-up.

Two days later, including the 368-mile journey home (during which we stopped twice for huge meals), apart from some residual stiffness my legs, feet and ankles are fine. Matchgirl’s hip is good too, although her knees are suffering a little. But everyone knows running’s bad for the knees…

I’m almost certain that’s my last Yorkshire Marathon. I’ve told Matchgirl to whisper “Dunnington” to me if I weaken. If I return to York next autumn it will be for the 10 Miles. Anyway, I’d already decided that next year, for the first time since London 2018, will contain no marathons (apart from the double marathon Race to the Stones, of course). Although I’ve still got the Loch Ness Marathon on my to do list, and Cathy tells me that Chester is fun. Or maybe I could get enough people together to do the Yorkshire Marathon Relay. I’d even volunteer for the Dunnington section so I could attack it with fresh legs and destroy my demons. You never know.