On The Home Straight

I wasn’t certain I’d make it, but I did – the longest training run of the London Marathon programme is done.

The weather yesterday was better (of course) but I wasn’t up to it thanks to a gig followed by a very sleep-disturbed night caused by a cat (Maia, of course) who hogged the bed and refused to move. I’m too soft.

So today was the big day. I was determined to cover 18 miles and hoped I might even reach 20, but after three hours and 20 minutes of slog in a cool wind with one brief shower I’d had enough. I could have continued for another 10mins or so (I’d set a 3:30 cut-off) but 19 miles would have been silly.

My plan was for three six-mile circuits at a 4:1 run/walk; after two I couldn’t face the big hill again – it’s a lot bigger the third time around – and made up the last few miles as I went along, finishing shattered but happy with the knowledge that the taper has now begun and I can ease off as The Big Day approaches. 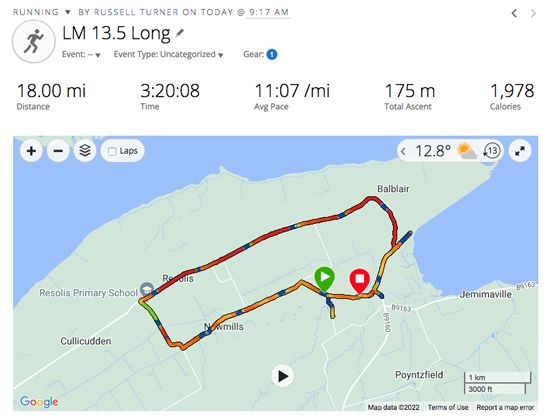 Memory plays tricks. I don’t remember other 18-mile runs being so hard, although looking through my Garmin records it turns out I whimpered and whined about them too. The only longest run I didn’t moan too much about was the 20-miler which preceded my 4:37 PB triumph in the good old days of 2020. I must have got more sleep then when the band was unable to play.

‘Only’ 13 miles for next week’s long run, and eight the week after that. Hopefully that will allow my battered body time to regenerate. And if any cats try hogging the bed tonight they’ll be booted off. An athlete needs his rest.