Week 6 of London Marathon training is over; Week 7 began today with an easy 5k during which my average heart rate was 120bpm and didn’t rise above 127. The heatwave is definitely at an end.

Not that we suffered too much here. While lots of England was in the high 30s and above, and the Borders reached 35, the highest temperature seen around The Rural Retreat was 25ºC on Tuesday, which should have been my long run day. I’d sensibly run it a day earlier when 18-20ºC wasn’t outrageous but the muggy conditions weren’t fun for 12 miles in 2:15, even at a 4:1 run/walk.

Yesterday I broke in my second pair of new Adrenalines – a rather natty kingfisher blue-and-orange – with a short but speedy intervals session at which the fast bits averaged 6:15min/mile, though only for 30 seconds. Maintaining it for 26.2 miles would take not a lot more time than the 12 miles I’d run on Monday. Incredible. 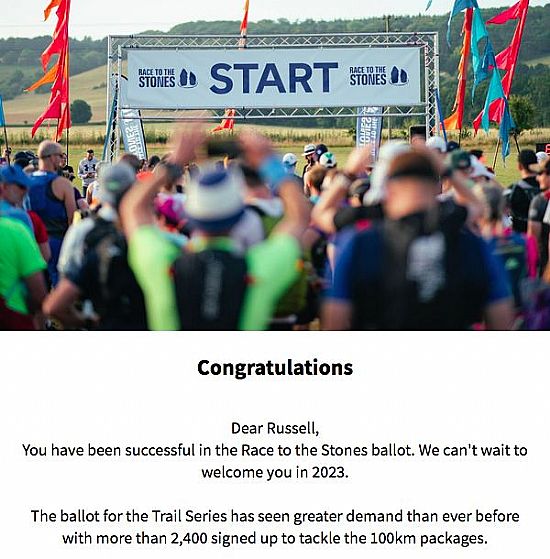 Or maybe I don’t. This week I learned that Matchgirl and I had both been successful in the ballot for the 100km (62 miles) Race to the Stones in July next year. We’ve both placed ourselves in the 14-18hr estimated finish time category but hope to do it in under 16. We’ll see.

We can both invite a runner to join us but injury is currently rampant: Squirrel James is only just back in action after a dodgy hip caused him much lost training and to abandon his October marathon hopes in favour of a half; Ex-Triathlon Cathy is tempted but not yet recovered from overdoing a 5k race and looking anxiously ahead at her New York Marathon place in November.