Challenged By The Climate

That was tough. Week 5 ended with a 2hr long run which I’d estimated would see me cover 11.5 miles, a day after a 6-mile mixed session. However, that didn’t take into account the heat (although it was much lower than parts of England) or a wind that Matchgirl, being used to the big blows in Shetland, would class as little more than a gentle zephyr but which challenged me in places. At least it kept the flies away.

After 5 miles I was ready to go home. I kept plodding on, using a 5:1 run/walk downgraded from my usual 6:1 because of the heat. Maybe I should have gone to 4:1. Or sent The Pride to a cattery so I could get some decent sleep.

I was certain I wouldn’t manage more than 90mins, unless I walked the last 30; by then I’d done 8.5 miles, which gave me the incentive to keep going to 10 miles so I wouldn’t do less than last week. That was reached at 1:47, which meant a mere 13mins to go; the run/walk continued to the end. 11.19 miles. Amazing.

Even more amazing was that the second 5 miles was a few seconds faster than the first. It had felt 10mins slower, which proves how much of running is in the head. I’m glad I didn’t have to go any further, though. 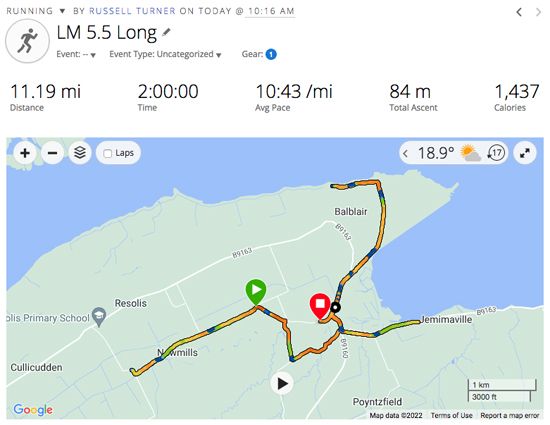 Today was also notable for my first use of Aftershokz to play music all the way round, rather than podcasts. Whether they helped or hindered is impossible to say, but I didn’t get bored with Yes. I’m undecided about music, podcasts or silence for the next long run: 12 miles (the plan switches from time to distance for long runs). Hopefully it will be cooler, but the current forecast is warmer. A lot less wind though. We’ll see.

I’d intended to wait a month or two before investing in more shoes (I’ll soon have more than Matchgirl) but yesterday I chanced upon last year’s Adrenalines at £36 off so snapped up two pairs at a cost of only £23 more than the £150 I’m due to be refunded for the failed Glycerins. They’ll arrive in the next few days, possibly just in time: the two pairs I use now (backed up by some even older ones) don’t have silly mileage on them but show definite wear, which may be some of the cause of sore ankles. We’ll see about that too.