I blame Matchgirl. She’d warned me about the hill in Mile 2 of the Glenlivet 10k but not how big it was. The complete course features 147m of ascent, which is more than any of the half marathon races I’ve done; there’s less even in the Yorkshire Marathon (110m). The only real race I’ve faced with more climb is the London Marathon (200m), which is four times as long.

The most rise I’ve encountered in a run was 253m (Virtual London) and 280m (virtual Midsummer HM), both starting from The Rural Retreat so they were nobody’s fault but mine.

Arriving at a rain-lashed and windswept Glenlivet Distillery, I’d already abandoned hopes of a smooth-paced trot around the course – finishing in under an hour would be an achievement. There wasn’t too long a wait to get into reception and collect my number, but no bag drop meant I had to walk back up the road where Grandson of Seat was parked on the verge, as were most of the runners’ cars, the planned grass parking area having been ruled out because of the weather.

The course profile – definitely not flat.

Back at the distillery, I discovered the sensible people lurking at the back of the buildings, out of the wind (we weren’t encouraged to loiter indoors) and shared route and weather conversations while we watched stick insects in shorts and club vests charge around, preparing for their assault on the 33:43 course record. There were far too many of them. I too wore shorts, but with T-shirt, long-sleeved shirt, a very-last-minute waterproof jacket, woolly hat and gloves, and never felt overdressed until a mile or so to go when I unzipped the jacket.

At 11am we bravely strode into the wind and rain, took our places at the back of the pack, and embarked on our 10k adventure, fooled by a first half-mile of flat and descent. Then the hill began, not ending, apart from one cruelly deceptive dip, until almost two miles later, by when we’d climbed more than 110m. I wimped out and took a couple of two-minute walks.

Three-quarters of a mile of flattish road followed, which would have been a good opportunity to enjoy the scenery if we weren’t being battered by the elements, then a satisfactory downhill mile and flat half mile which I obviously overcooked because I was walking again at the next slight incline.

That, I’m pleased to say, was the last time I walked, occasional undulations notwithstanding, although I did slow after five miles when I drew level with a young-but-portly guy, bent almost double, who looked as if he was about to drop. When I asked if he was OK he set off running again without answering. I left him to it but a moment later looked back when I heard a commotion and saw him staggering, assisted by other runners. I alerted the first marshall I saw. It’s easy to forget that for some people, like the woman I ran beside for a short while who’d only ever run 5ks before, 10k is a challenging distance. 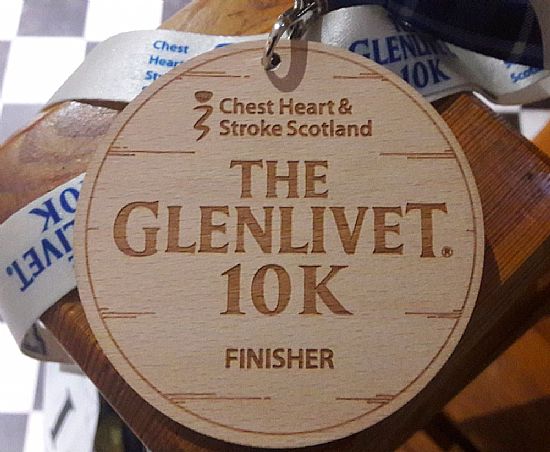 Much better than the teeny medal that's usually handed out.

The last half mile is all downhill, especially the final ten yards (and beyond) which almost found me in a ditch or bowling over spectators because I couldn’t risk a sharp halt in the skiddy mud. Disaster was averted. From there it was a brief walk back to the distillery with a halt halfway to collect medals (a rather fine wooden one) and goody bags. The track came out closer to the car than the distillery so, as the rain still fell and wind still blew, I put dry clothes and shelter ahead of the possible excitements back at the race start.

While I enjoyed the banana I’d brought with me, closely followed by chocolate and shortbread from the goody bag (the miniature dram will be imbibed tonight), an ambulance hurried past towards the distillery. If it was for the staggering runner I hope he recovers quickly.

My Garmin showed 1:00:49 for 6.23 miles. I’d failed to come in under the hour but considering the weather and the hill I was satisfied. I’d like to try it again in its usual spring slot (Covid moved it this year) – the website shows a much more pleasant day out – but it clashes with London Landmarks, so maybe 2023. Official finish times and (free) photos are not yet available. 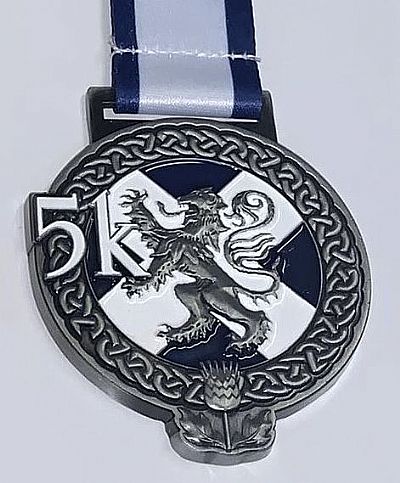 What will likely be my final medal this year.

That’s the 2021 race year just about done. Dava 50k would be in two weeks, if I’d not dropped out; the next date in the diary is January 11, when training begins for the Inverness HM. I’ve a few ideas in mind for things to keep me ticking over but nothing definite apart from a 5k PB attempt some time in November so I can claim the St Andrew’s Day medal (possibly my final virtual one) I signed up for early this year.