The rain fell, as has become the tradition of my Yorkshire Marathon day attendances. Thankfully, after giving Matchgirl and me a light dousing on the way to the event village where I collected my 10 Miles race bib, followed by 20 minutes huddled beneath one of the university’s overhanging buildings, precipitation petered out and we were able to walk to the start in the dry. There I bid farewell to Matchgirl the spectator and wormed my way through the runnery throng to reach the 1:45 pacer, on whom I’d pinned my hopes of a sensibly restrained start to the race; it was also an acceptable finish time if I stuck with her all the way.

First-mile exuberance was tempered by a couple of bottlenecks so I stayed with the pacer for ten minutes until my comfortable pace edged me ahead. By the time York Minster, and some enthusiastic crowds, came into view at Mile 2 I’d been pulled into the orbit of a brace of 1:40 pacers and their non-stop chat.

“It makes a change to take it easy and have a natter,” declared one of them, whose run showed not a trace of effort. My conversation was not quite so abandoned but I stayed with them without trouble until the halfway mark when I edged ahead again and left their chatter fading away behind me.

From there I followed a couple of Lonely Goats, whose pace matched mine. Also in the vicinity, sometimes ahead, sometimes behind, were the girl running in a sash which declared today her birthday and won much acclaim from spectators; the heavy-footed guy whose thumping progress it was easy to follow; the two women doing a run/walk who sprinted ahead, only to be overtaken minutes later, several times; the guy who may have had cerebral palsy, such was his awkward running gait; the two Asian women whose modesty was preserved by a garment that began with a hood and ended around the knees, beneath which were plain tights; a guy who looked as if his kit came from a charity shop; and trendy young women with colour-co-ordinated tops, bottoms, shoes, hairbands and, probably, nail varnish.

All shapes, sizes and ages; all – on the day – of matching ability.

The course, outside of York, was flat with a few slight undulations. Spectators were abundant in the villages we passed and water stations plentiful, although I didn’t need them as I carried my own. I also eschewed the gels on offer, working on the principle that I wouldn’t be running long enough to need them. Maybe I should have taken one – I was flagging a little after seven miles, although my pace remained steady.

After Mile 8 I came alongside another six foot six runner – a rare enough occurrence that we fell into step and had our own natter for the next 15 minutes. He’s who I blame for my pace dropping a little: it would have been churlish to just run past him.

He’d pulled ahead slightly when we reached Heartbreak Hill, the short but very steep climb up to the university, but at the top I found myself ahead – I’d managed to not walk, although it was a close thing – and pulled out a brief sprintette along the final slight downhill to the finish line, spurred on by the sight of a cheering Matchgirl and the knowledge that I could sneak in at under 1:40, which I did. My chip time was 1:39:17 – not bad two weeks after Covid. I’m glad I didn’t attempt the marathon, though.

Burger and chips followed, with Matchgirl again a spectator, then a gentle walk back to our Airbnb flat where a shower and the remnant of last night’s pizza completed my athletic day. The legs are not too sore (although they might be worse tomorrow). My ankle is no better but no worse. The only injury to report is a slightly battered toe on the right foot. 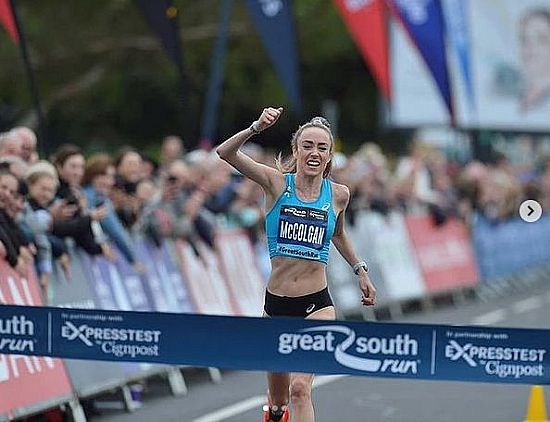 A bonus is that, for a change, I might have a couple of course photos worth buying. Sadly, they won’t be as good as Eilish McColgan’s, who finished her 10-mile Great South Run today in 50:43. It’s all relative.