Running Up That Hill

Loch Ness Marathon Week 11 training ended today with a mere 13 miles, so to make it even more of a challenge I added the extra 0.1 – and a punishing climb to make sure I wasn’t going too fast. No chance of that.

For a change, the weather was fresh rather than warm and humid. A bonus was that my super-cushiony Brooks Glycerins had arrived unexpectedly early. They’d proved themselves on a 2.5-mile tryout yesterday so today seemed like a good opportunity for a real test.

I set off at a 6:1 run/walk intending to do two of my regular circuits but at the end of the first was overcome by madness and made for the Poyntzfield hill which rises more than 40 metres in a third of a mile. Someone better at maths can calculate the gradient. The next mile, to the main road, rises only 25 metres but on a bumpy, stone-strewn farm track. Care was needed.

At the main road I could have gone downhill but I needed more to reach my 13.1-mile target so I turned uphill again and on to another rough track which leads into the woods. I turned around after half a mile, having climbed another 40 metres. In all that time I didn’t see another person, let alone a car (although I did pass a tractor toiling in the field). City runners don’t know what they’re missing. 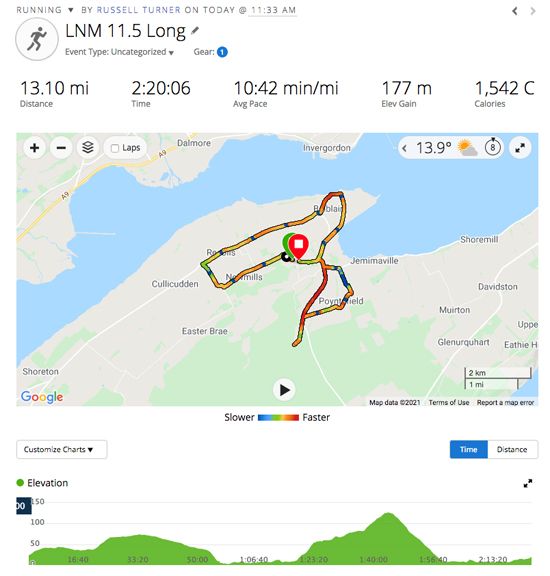 So the final megahill (by my standard) stats are 2.2 miles, 116m elevation gain, covered in 26mins. The notorious Loch Ness hill rises only 70m in 2.2 miles, but that’s after 18 miles of running. Today’s big hill began after seven miles. Despite that, today’s effort has increased my confidence that I’ll cope with the marathon’s hills. Even if some walking is involved.

Five weeks to go, and we’re on the verge of marathon-friendly autumnal conditions. What could possibly go wrong?