Idling The Days Away

Seven days have passed since the Leamington Spa HM and the last time I ran, or even walked any distance. That’s not because I’m incapable – just allowing my testy tendon to calm down.

The rest has done it good. There’s still some stiffness, and an occasional slight twinge, but nothing I’m worried about. A few more idle days, and the ministrations of Adam the Physio on Tuesday, should see it restored to full working order. I hope.

This would have been an opportunity for cross-training and strength work, if I did such things. Instead, in the absence of Matchgirl, much reading, TV, general lazing around and poor nutrition has occurred. I’ve even gained a couple of pounds.

The most exercise I’ve taken in the last week involved mowing the lawn, although as The Rural Retreat’s acres are vast it was a reasonably energetic job. I’ll take a few walks this week ahead of a return to running next Sunday and the build-up to the York 10k on August 1st. 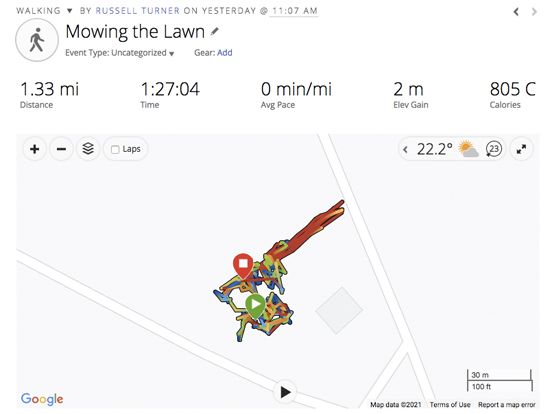 Also on the agenda next week is some bass practice ahead of not one but two gigs next weekend: our first post-lockdown pub appearance on Friday and a wedding reception on Saturday. In August we’ve three gigs, and four in September. After that things calm down again, although bookings should pick up soon when restrictions are relaxed. Whether they’ll stay relaxed remains to be seen.

One snippet of good Covid news is that my test today was negative so Matchgirl can return to a home guaranteed free of plague. What she brings with her is another matter, after dining out with the girls and spending time on a plane. Those Vikings don’t care.