The weather was fresh, not too hot, with a slight breeze, maybe even the threat of a shower – perfect for a long distance run. Shame that was this morning. Yesterday, for the third running of the Leamington Spa Half Marathon, and my second appearance there, the weather wasn’t quite sultry but it was definitely titivating its hair and looking for crimson lipstick and a figure-hugging dress. Much the same as last time, in fact.

This was no great surprise. On the way south I’d driven through sunshine and showers torrential enough to limit vision and slow sensible motorists; the idiots zoomed through the spray without a care. So some humidity was expected.

We’d been told that, to be socially distanced, runners would set off in threes according to predicted finish times. It may have started like that, but by the time I sauntered into the Pump Room Gardens, 40mins after the real runners had sped off, the remainder had self-organised themselves into a patient queue which shuffled, two metres apart, towards the start line. I joined the shufflers and maybe ten minutes later started my Garmin and crossed the line.

The conditions were no problem early on, despite the first half containing the two biggest uphills, peaking at 2.7 and 4.8 miles, the first rising around 50 metres – mere pimples in the eyes of hill, fell and ultra runners but more than enough for we tailenders. However, I had a Camelbak filled with Tailwind and overconfidence born of overtaking lots of runners and being passed by only a handful.

From 4.8 to halfway was mainly downhill, so I still felt good, chatting with the occasional runner as I passed them (the guy wearing a St George’s flag predicted a 2-0 victory – it was not a good day for him), and tutting at the despoliation of rural views by work on HS2. After nine miles all was still going well until a relatively mild incline of 20 metres (albeit in a third of a mile) slowed me a little, but I kept running, and overtaking.

The last straw came at 10.7 miles, after a series of minor but interminable undulations, at the top of each a cheerful local in a deckchair assuring us, as he sipped his cool drink, that this was the last one. The blessed downhill finally arrived and with it a flat run to the finish – except for one last rise so minor (8 metres) that it barely registers on the elevation profile. My only excuse is that it’s a steep one. So I walked for two minutes and ran the rest. Shameful.

Last time I ran with a pacer. This time, Covid meant no pacers (running in gangs being discouraged), and, as bad luck would have it, at the time of The Mighty Little Hill I had no-one around me to latch on to. I’m sure I’d have kept going with company. 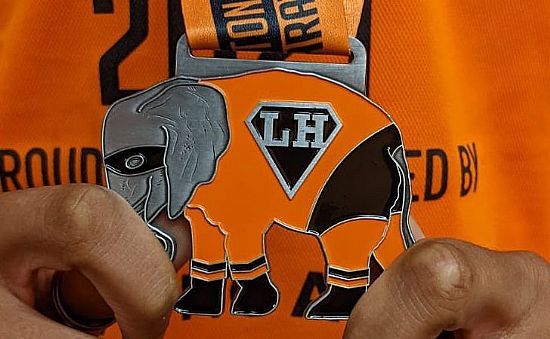 The Leamington HM medal – a superhero elephant, of course.

The bottom line is that I finished in 2:12 (I’d estimated 2:10-15 when I set off), 7mins faster than last time and not quite as wrecked at the end. This was almost a minute slower than my Virtual GNR81, when I’d run/walked the whole way, although that was flatter and less humid. Or possibly just better paced.

After collecting my medal, banana and water from a succession of Brownies, and my shirt from a more grown-up volunteer, I relaxed on a bench for a while (lazing on the ground like many others ran the risk of not being able to get up again) then wandered over to encourage arrivals even slower than I was.

My testy tendon was grumbling a bit afterwards, and even more this morning after it had taken the opportunity to stiffen, so I’ve made a date with Adam the Physio and plan to limit myself to walking for the next two weeks, which will be my longest break from running since it all began in October 2017.

The rest will be useful: last Friday, having been warned that entries may close early, I finally signed up for the Loch Ness Marathon (as did Matchgirl), which is held on October 3. Two weeks off will leave me with ten weeks to prepare. At least it will be cooler by then.