Haring Through The Haar

It’s been a good day for runners (sorry, Cathy): Squirrel James ran 4:57 in his debut virtual marathon, an extremely smiley Matchgirl continued her comeback with a second 16-mile weekend, and I knocked 1:33 off my 10k PB to earn my second virtual London 10,000 medal.

Conditions on the Black Isle couldn’t have been better, with no wind and haar keeping it cool. I’m still making some of the same mistakes, though, like getting carried away on Mile 4, after a well-paced first half, and having to put in some walk breaks.

Or maybe I didn’t need to put them in but lacked the mental toughness to keep going. The final break, with only 0.2 miles to go, was definitely head rather than legs. I knew I’d bagged a new PB so why keep pressing? The consequence was a 52:20 finish when I might have achieved sub-52. At least I now know that can be done. York 10k could be the next target. 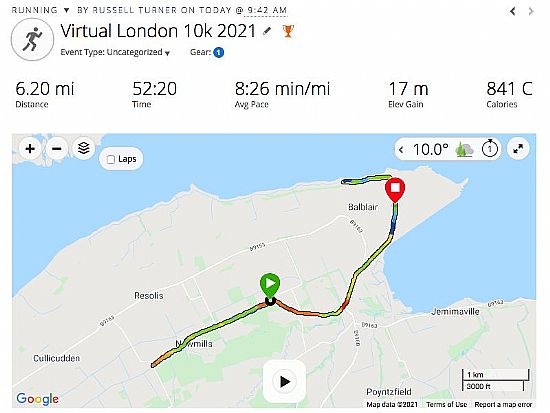 Matchgirl, when I admitted my wimpishness, didn’t tell me to man up in future but I could see that the thought was there. Maybe I should woman up, as recommended by ultrarunning star Damian Hall in his new book (Matchgirl’s a fan), In It For The Long Run, when he ponders the fact that the percentage of female DNFs in mega-distance races is very much less than male ones. Women are tougher.

Further proof of that may be illustrated by my current injury, although it’s nothing to do with running. City Limits convened on Friday for its first rehearsal since October (since when I’d barely touched the bass), leaving me with a extremely sore left-hand little finger – the muscle must have wasted away over six months. More practice is needed if I’m going to be able to hold down the strings.

The get-together was called because the band has a gig next week. Sadly, this won’t involve me and drummer Duncan because the wedding reception venue has unilaterally imposed a two-person limit on the size of entertainment, leaving singer/guitarist Keith and keyboards wiz Richard to fly the band flag. As they’ll be there to provide background music, dancing and audience participation being currently forbidden, Duncan and I won’t miss much. A pay-day would have been nice, though.

Of the two gigs in the diary later in June, one is 90% rescheduled (some people are so indecisive) and the other is happening in theory but probably won’t. One in late July and four in August appear more promising, at which point I’ll probably be grumbling about them disrupting marathon training. Lockdown wasn’t all bad.