Another One Bites The Dust

The future looks gloomy. A month after notification that my first race of the year, the Wigan HM in March, had been cancelled, today runners learned that the Inverness HM, in May, has also been scratched “following consultation with government agencies, local authorities and emergency services”. Both entries have been moved to 2022. As the Edinburgh Marathon is just a fortnight after we should have been running through the streets of Inverness, its prospects are bleak.

Plans for a virtual Inverness HM have been promised, leading to an outbreak of grumbling in some quarters that virtual runs are pointless. Maybe the grumblers think that they’re compulsory.

If one is offered I’ll take it and make a bid for my first sub-2hr HM. After all, the marathon training programme will continue, even if it’s just towards a virtual Edinburgh. That said, I found little motivation to get out and do today’s training run and stayed indoors instead, although the gales rattling the windows probably played the greatest part in that decision. 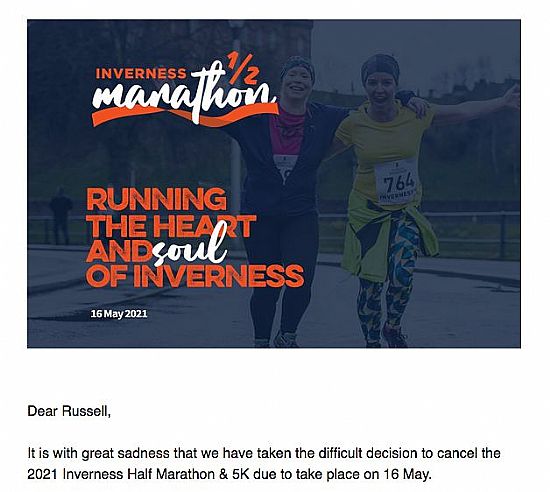 Ironically, the latest call-off comes the day after biker Richard offered me unsolicited accommodation before the Leamington Spa HM in July – yet another race deferred from last year. It’s handy to know that the offer is there; whether the race will happen, or if I’m allowed (or want) to travel is another thing.

The Inverness HM was to be the day after the first City Limits gig in the 2021 diary. The prospects of that, and another the following week, just got a whole lot gloomier too. Happy days.