Defender Of The Wrens

My consolation London Marathon running jacket (for failed ballot entrants) arrived just in time. Today’s temperature was no worse than the last few days – around -1ºC – but there was enough wind blowing off snow-covered fields to make it feel much colder. The light-weight jacket (which feels like a quality garment), added to my usual attire, meant my four miles in 40mins was completed without trauma.

Things could have been worse. Just a few miles away, drifting snow has made some Black Isle roads tricky to traverse.

I returned to The Rural Retreat half-expecting carnage but all was quiet. The day had begun with Pandora late for breakfast after bringing home an ex-woodcock. Why it had strayed into the garden I don’t know, but it was a fatal mistake.

Later, the sound of rustling in the wall turned out not to be rodents but wrens – a situation we’ve faced before. Three took it in turns to emerge from (I assume) a tiny hole behind the living room radiator and face serious attention from Willow and lesser interest from Maia. Pandora snoozed upstairs, such small game clearly beneath the hunter who’d brought down the mighty woodcock (which must have taken some effort to carry home – they’re sizeable beasts). 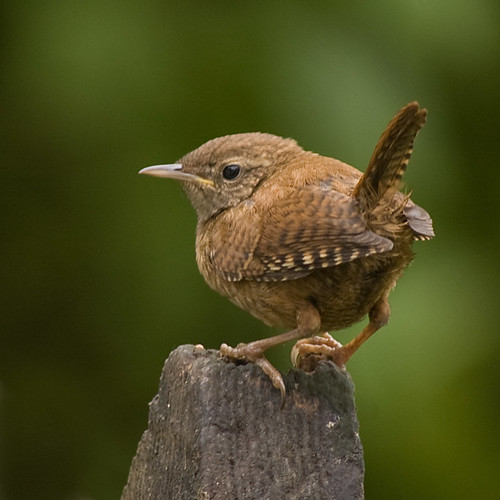 A wren I snapped a few years ago

I was able to guide each wren out through the kitchen window and into the frozen outdoors, where they must have quickly realised how well off they’d been in the wall cavity. I presume that hunger was the reason for their exploration. Wrens can suffer an 80% mortality rate in a hard winter, my RSPB book informs me, although they bounce back quickly.

No more rustling could be be heard, so with luck there’ll be no more feline frenzy while I chivvy confused birds through windows, taking all the heat with them.

Comment from Cathy Robertson at 12:36 on 14 February 2021.
Just searched t'interweb to find out what a woodcock looks like. I see what you mean about the challenge it would have presented the mighty hunter to get one back home!
Comment from Russell at 14:58 on 14 February 2021.
I didn't know what the bird was but knew enough to find the correct section in the RSPB book. From there, having had the opportunity of a good close-up study, finding it was easy. The only thing Pandora's had of a similar size is a wood pigeon, but they're pretty dopey. On both occasions the corpse was left outside the door, presumably when she realised the struggle she'd have getting it through the cat-flap. Willow managed it with a swallow once, which survived.