Back In The Snow

It snowed yesterday and more overnight. Fortunately, by the time I was ready for today’s 5-mile stint the roads were clear, if very damp and a bit slushy in places, and I was back at The Rural Retreat without incident.

Cats have been less impressed by the conditions. Pandora, the resident snow leopard, took them in her stride but Willow got barely six feet beyond the front door, stepping carefully in existing footprints, before returning to the warm. Maia didn’t even leave the cottage, unless it was while I ran.

Being a caring cat slave I cleared a route through the snow from door to willow tree, so felines could take care of business, but so far my efforts have been ignored. Cats don’t do gratitude. 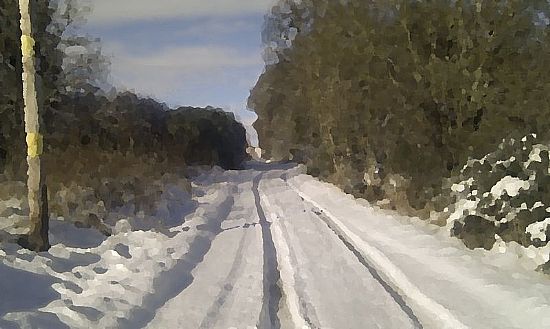 I blew dust of the Pentax and took it out later, although the only snap I saved was captured earlier on the ancient smartphone I carried while running. I liked the composition but the picture quality wasn’t great – it’s a very ancient smartphone – so I disguised it with a Photoshop filter.