A Half For Hogmanay

I’ve abandoned plans for a festive solo marathon – the idea was sound but the motivation wasn’t there. In its place is the more achievable goal of a half marathon on Hogmanay to end the year in style. Weather permitting, and assuming I don’t lose interest along the way.

My target is to crack the two-hour barrier, so I’ll be flexible with regard to Hogmanay; recent after-fog dampness has proved as energy sapping as hot summer days so I’m looking forward to some crisp winter weather, although whether that’s suitable for two hours’ hard running remains to be seen.

Should I be successful, or even just sneak below 2:04, that would mean having gained all five PBs in the second half of 2020, so although it’s been a rubbish year I’ll have some success to look back on.

Training has begun, and yesterday saw the first run of Week 2 of 9. Required distances/times have been reached but in a decidedly sluggish fashion, possibly connected with an increased consumption of biscuits and late-night TV (Mad Men on Amazon Prime is recommended) in the absence of Matchgirl who’s ventured beyond the safe confines of The Rural Retreat by making her first trip to Shetland since lockdown, via Aberdeen because Loganair has thoughtlessly cancelled direct flights from Inverness.

A further impediment to good running nutrition is the huge sack of cooking apples delivered by Lili next door, desperate to reduce her glut of surplus fruit. (Our ancient eating apple tree, in contrast, produced nothing this year.) This means that apple crumble may make a regular appearance on our menu, and I’ll be forced to try my hand at apple cake, apple pie and apple charlotte, and maybe even chutney, to make inroads. It would be a shame to waste such bounty. 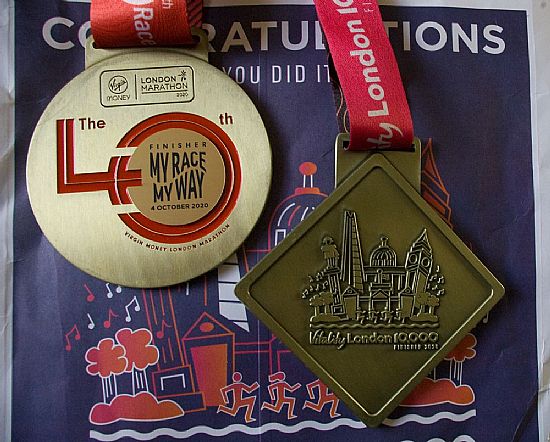 Encouragement to keep running arrived yesterday in the shape of my Virtual London 10,000 medal and the very stylish shirt that goes with it. Sadly, it may be some time before I can wear the shirt because recent runs have all required long sleeves, although – much to Matchgirl’s disbelief – running tights have yet to take the place of shorts. The time will come when cold and wind combine, but for the moment my legs can cope with both singly.

I’ve no plans to sign up for a random virtual half marathon medal to mark my planned Hogmanay run. However, if anything suitably illustrative is offered next month I may be tempted, especially if enthusiasm flags as days grow shorter.