I entered this event to encourage me to go for a new 10k time rather than trot around and collect a pointless virtual medal. It seems to have worked, even though today’s race plan was abandoned after the first mile when I – surprise, surprise – set off too fast.

My PB was 56:07. My minimum target was to get under 56mins, at 9min/mile average pace, taking the first two miles easy (especially the big uphill near the end of Mile 2), sprinting downhill in Miles 4 and 5, then seeing what was needed from there. No problem. Except I did the first 1.5 miles at around 8:20 pace (my best 5k pace is 8:13) and the hill might have have killed me. 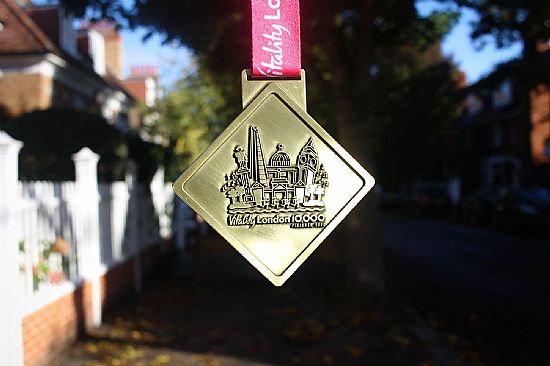 So I turned around, walked for half a minute, and made up the rest of the route as I went along, taking a brief walk if I went below 8:30 and trying to keep each mile under 9mins. This wasn’t the smooth negative split run I’d hoped for but the result was good: more than 2mins off my PB to finish in 53:53. I remember when getting under 62mins was an achievement, let alone under an hour.

I’ll attempt the race plan again another time and try not to wimp out of the hill, whatever the pace leading up to it. I doubt I’ll ever get under 50mins but with a bit of effort I might get a little closer. 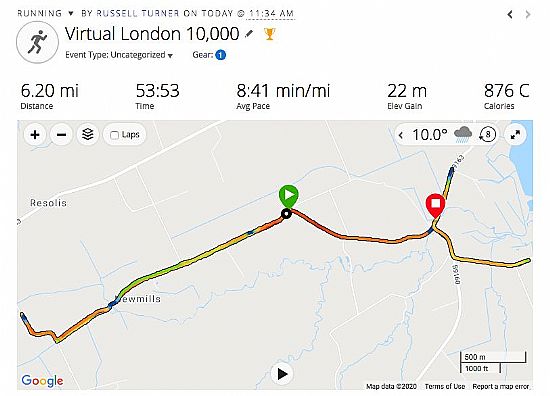 Socially distanced real(ish) races are being staged, but too far away for a day trip. Overnight jaunts don’t appeal. The Shakespeare HM in April, postponed from this year to next, has now been scrapped – which doesn’t show confidence in Covid being just a memory by then – and the Balmoral 10k, also in April and on which I had an eye, has also been scratched for 2021. I suspect more will follow.

So virtual racing may continue to be all that’s available to me. It’s just as well that it suits me, although it would be good to see how much better (or worse?) I’d be with spectators cheering and people to chase.