Today is the third anniversary of my first steps as a runner, which began with a week of brisk walks the day after receipt of my unexpected London Marathon 2018 You’re In magazine; the following week the couch to 5k programme and actual running happened. Less than three years later, with no days to spare, yesterday I achieved my ambition of a sub-5hr marathon. I’ve come a long way.

I didn’t just sneak under five hours either: 4:37 – for a while the dream of sub-4:30 appeared possible. But that was at halfway.

My master plan was for four circuits of 7, 6, 7 and 6.2 miles to crown a training schedule begun on May 18, with a break to complete the Virtual Race to the Stones, and which covered 572 miles with no injury and several proper long runs at decent pace. The weather was kind – mild, dry and mostly still, unlike the apocalyptic wind-lashed downpour still forecast for Virtual London Marathon day – and despite poor sleep I was optimistic.

The first circuit, including the short but steep Resolis hill almost two miles in, was fine. I stuck to my Tailwind-fuelled 6:1 run/walk and passed The Rural Retreat for the first time, where I was hailed with enthusiasm by Matchgirl and neighbour Lili, in 1:10. This was a couple of minutes ahead of schedule but I didn’t feel I was pushing too hard.

The second circuit was equally comfortable and found me passing the Retreat at 2:10, now five minutes ahead of schedule. That should have been the warning I was getting a bit carried away but all seemed fine – until I hit Resolis hill for the third time and needed a couple of extra minutes’ walk to reach the top. I recovered but by Mile 19 I was beginning to suffer. 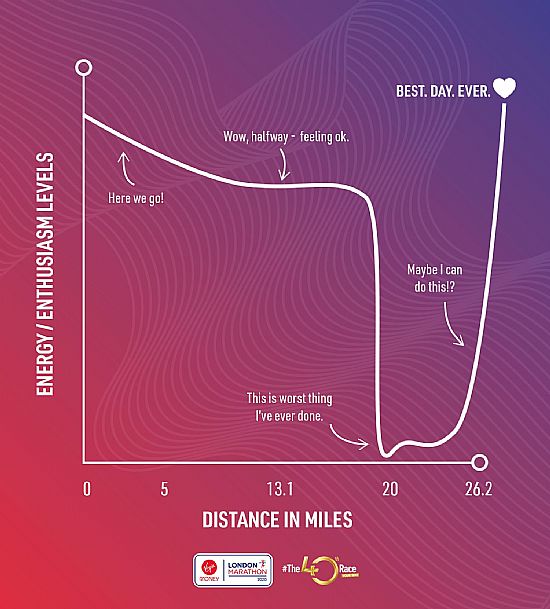 This turned out to be surprisingly accurate.

I reached the Retreat, halfway up a shallow but long (about 0.75mile) incline, for the third time at 20 miles, still five minutes ahead of schedule. Matchgirl was there to hand me a fresh bottle for my final push and give me encouragement to keep going, which I used as an excuse to walk with her the few minutes to the top of the hill; 6:1 resumed thereafter, although without the spring of the first 13 miles.

By now, unable to face Resolis hill a fourth time, I’d replanned my final 10k: out to the halfway point of my regular 5k route, back and down the hill past the Retreat (Mile 23), then out and back along another regular route to finish at the bridge at the bottom of the incline and spare me running up it again. What could possibly go wrong?

Surprisingly, I stuck to 6:1, although the run/walk was now more of a stumble/stagger, but there was no room in my head for mental arithmetic so I made my final turn for home too early and reached the bridge with half a mile still to do. Matchgirl, who was there to record a triumphant conclusion, was therefore witness to the spectacle of a runner taking shorter and shorter runs backwards and forwards, like a mouse trapped in a box, until he hit 26.2 miles. Not an elegant finish.

But I’d done it: 4:37:52 at 10:36 pace – faster than some of my half marathons – with no crowds to spur me on, no other runners to chase and some silly hills because there’s not enough flat around here apart from the Cromarty road, which didn’t suit my plan because it has unpredictable headwinds. 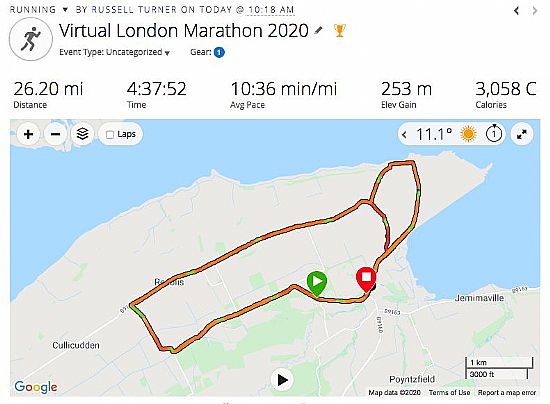 A day later, I’m still knackered. A night with virtually no sleep didn’t help. It could be residual adrenaline, Matchgirl says, or it could be the huge portion of celebratory fish and chips being digested, or it could be the feeling of legs on the verge of cramp if left in the wrong position. Probably a bit of all three. At least I can walk up and down stairs OK, albeit slowly, and by tomorrow, when we settle down to watch the marathon on TV, if we can hear it above the rain battering the Retreat’s windows, I should be mostly recovered.

My plan for a one-mile run with my race number on (I didn’t use it yesterday), so I could take part in the day itself, will probably be abandoned though. You have to draw the line somewhere.

Today I feel like 2021 without a marathon wouldn’t be a bad thing – try to get my half under two hours, maybe – but by the time it’s time to start thinking about training for the rescheduled Edinburgh and Yorkshire Marathons I’ll likely be raring to go. One thing I might have done for the last time is a virtual marathon. All that distance and effort and no excited crowds and medal as you cross the finish line. It’s hard. But I’m glad I did one, and I’ll do my best to wangle the virtual medal even though I didn’t run it on the proper day.