Less than two weeks to the Virtual London Marathon. Today’s long run was the last substantial one before The Big Day: another half marathon – my seventh of the year. My training pace must be consistent because it was the third to finish in 2:16; all I have to do is repeat it and I’ll have a very decent new PB.

The 13.1 miles consisted of a seven-mile circuit, a six-mile one and a bit on the end, covered in a 6:1 run/walk. I’ve considered some additional out-and-backs to break up the 26.2 but decided that I’ll stick with the circuits and the 6:1 as they seem to do the job. Tailwind worked today too, so as long as Matchgirl remembers to put out a fresh bottle for me to pick up at the start of my final circuit that’s also sorted.

All that’s left to hope for is decent weather. The more reliable Met Office forecast doesn’t look that far ahead; the more cavalier Meteo forecast, which does, predicts light showers and moderate breeze for the entire week ending on (and including) October 4th. We’ll see. Showers I can live with, although, unlike Matchgirl, I’d prefer the dry; more than a breeze would be a nuisance. 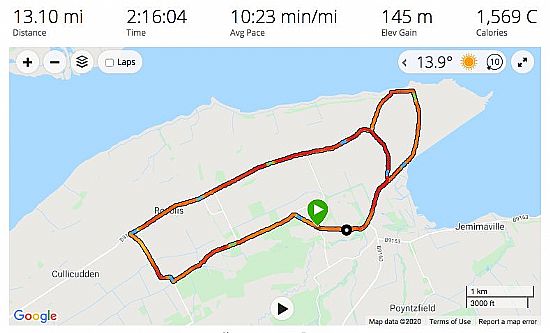 Every marathon I’ve run so far I’ve hoped to finish in under five hours, and failed. Sometimes miserably. This time I seriously expect to (accidents permitting), and by at least 15 minutes. After taking away most of my real races it’s the least The Running Gods can do.