Piling On The Miles

Another week, another long run – just one left (20 miles) before the three-week taper, ending on October 4 with the Virtual London Marathon. The prospects for a decent finish time look good, although I’ve thought that before.

The difference this time is that not only have I done more runs, stepping up volume to (mostly) five a week, but I’ve also done some substantial long runs. Looking back through my Garmin records, I was taken aback by how few runs of 14 and more miles I’d managed in the lead up to the previous marathons: no more than three or four each, and those mostly at the lower end of the scale.

Memory plays tricks. I knew my first two attempts at 26.2 miles had been hampered by (minor) injury but can’t explain why the following two were so dismally sparse re long runs. The silver lining of coronavirus and no gigs is that I’ve had uninterrupted time to train and no excuse for not completing some proper long runs. Growing experience probably helps too.

The training cycle that began as 16 weeks for the cancelled Edinburgh Marathon has grown to 20 weeks, including a break for the Virtual Race to the Stones and a week off afterwards. In the last three months I’ve run 20 miles, 18, 16 (twice) and 14 plus three HMs and a leisurely 19 miles during VRTTS. By the time my 20 weeks ends I’ll have covered around 600 miles – not including the marathon. I think I’ll have earned a good finish time; let’s hope I remain free of injury. 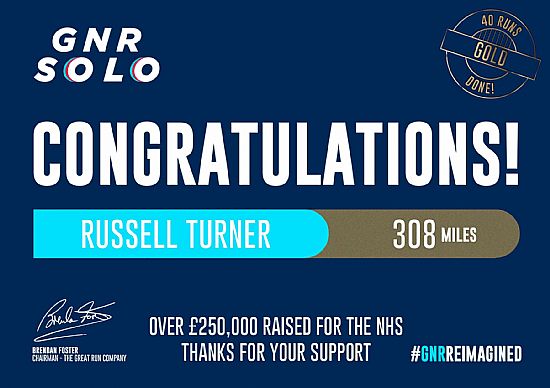 I’ve one more medal on the way, thanks to the latest long run which completed my Great North Run Solo campaign. Really it’s a medal for nothing, as are most of the virtual ones (not the VRTTS – I’ll show that off with pride), because I’d have done the runs anyway, but it will add to the jingle every time I open the bedroom door, where they hang.