Race To The Stones – Day Four

A sultry evening, a cat with no concept of personal space, and legs battered by a third day of running meant little sleep was had last night, ahead of today’s final athletic stint. Fortunately, it didn’t matter: after a seventh run, of 8.68 miles, I crossed the virtual finish line (running) of my 100km challenge and completed the Race To The Stones. Then I added a little more, just in case, so I wouldn’t become one of the unfortunates shown on the leaderboard who’d stopped at 99.8km and would have to run around the block to reach their target. A hundred kilometres is 62.14 miles, not 62.

I’d set off on the final run, on a hot afternoon, with the Garmin set for a 5:1 run walk, but after four minutes walking uphill I kept running, more or less, for the rest of the distance. The legs didn’t seem quite as heavy as when I’d struggled out of bed but the IT band’s grumbles grew louder the further I went. It helped that they were worse when I walked.

If I was hardcore I’d make a four-mile recovery tonight, so my total would average a metric marathon a day for four days, or keep running for the rest of the week to reach 100 miles in seven days. I’m not: 100km is enough. Tomorrow the legs will be rested and a celebratory chocolate cake baked (by me – Matchgirl’s lack of culinary effort is legendary). 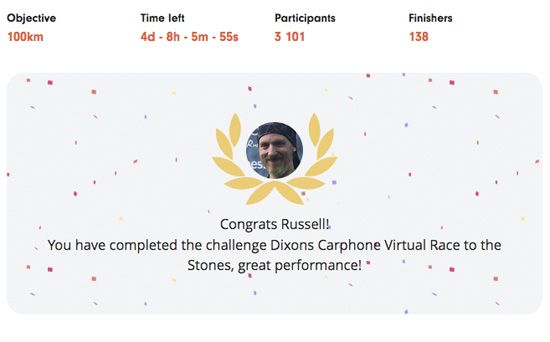 There are 3 days left, not 4. The IT glitches continue.

My four days of virtual athleticism – begun a week after giving blood and around three after first hearing of the event – took 12:20:50 of running, with 491m of elevation gain (the real thing has 1,130m – I abandoned that target very early on), at an average pace of 11:51, average heart rate of an impressively low 121bpm, and used 7,179 calories (of which Matchgirl’s jealous). The latest, adjusted, leaderboard shows me 68th out of more than 3,000 entrants; I’ll overlook the fact that a lot of them plan to do it in one or two days at the weekend. Show-offs.

Would I do the real thing? I’ve considered it, but next year’s date clashes with a City Limits wedding (as do all the Race To The… series) and I’ve already booked off several weekends to accommodate races rescheduled from this year. And the virtual advantage means more time to do it, plus never being far from home. But never say never. Maybe one year.

In the meantime I’ll take off the rest of this week and next week then return to the virtual marathon programme. The sub-5 dream continues.