Race To The Stones – Day Two

The legs were ready for more miles today, despite running 17 yesterday, but definitely felt a little heavier. Now my Tailwind stocks are replenished the plan was 12 miles without a pit stop and two miles of recovery run later in the day.

That was the plan, but beginning with a bold uphill was probably not a good idea, even with a brief walk break every mile while I drank. The first six miles was a circuit but I resisted the temptation to call in at The Rural Retreat and continued towards Newhall Point and a short but big hill I intended to walk up. I never got there, deterred by a sharp rain shower that caused me to turn around. Yes, I’m a wimp.

The route after that was ragged and unplanned (but dry), including another hill, and ended back at the Retreat after a total of 11 miles, which felt a decent distance on tiring legs. Inside the Retreat, suddenly the base of my back decided to be sore, which was a worry. Warm-down stretches were brief and cautious. 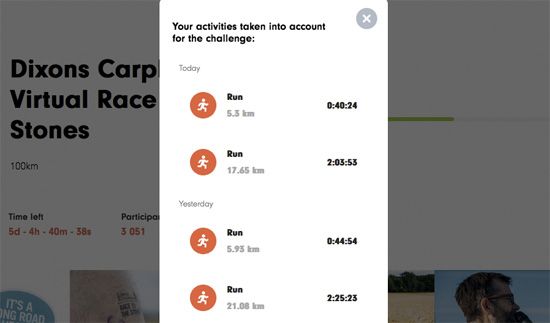 Two-and-a-half hours later I was out again for a 4:1 recovery run. The back felt fine, the legs were heavy but did their job, and after just over three miles I hit 50k/31 miles at a total running time of 5:54:35 (according to Garmin) – and a small blister on the right little toe. Half way there.

My plan was to do the second 50k tomorrow and become an ultramarathon man, or at least attempt it. Even the weather forecast is on my side, predicting five hours of sunshine and very little wind (if I set off at 6am). However, that may be an ambition too far. Plan B is to add five miles to the October virtual marathon I’m working towards, which would be run without silly distances in the preceding two days. We’ll see.