Careless Cats And A Kitchen

I’d like to be able to say that the lack of blog is because so much is happening that I’ve not had time; instead, life is remarkably quiet (apart from the occasional feline hissy fit when next-door Percy comes too close).

City Limits continues to prosper, and is on the shortlist for Scottish Wedding Band of the Year, which we won in 2018. So the odds of a second success are long. My running career ticks along with, as of this morning, 72 miles to cover before the end of the year to hit 1,000 miles and win a bonus medal. The latest Chatterbox is in the shops, still in demand, and I’ll learn next month if it’s in the running again for Highland and Islands Community Newspaper of the Year.

Its future looks brighter than that of my former employer, the Great Northern Media Empire, which earlier this week was in receivership for a couple of hours until it was taken over and renamed. Its saviour said savings will have to be made, which will be a chilling message for the few employees left after earlier cut-backs and redundancies. I’m well out of it.

So the only real excitement has centred on our new kitchen. It still lacks the yet-to-be-delivered pictorial hob splashback (and we’ll overlook the painting of walls because cats have to recover from the visitation of tradesmen) but everything else is in place and looking good. 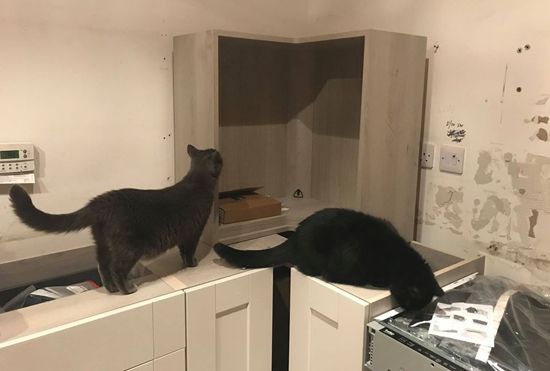 I’ll post a picture of the kitchen when the splashback is in place. In the meantime, here are two cats helping with construction.

Not everything’s peachy, of course. Mr Fridge man had to come round to correct the work done by Mr Electrician when he swapped round the doors (we needed them to open the other way) and left the interior light not working and the freezer door not quite sealed. The washing machine has had its first use, despite a missing widget in the detergent tray which I’ve now bought from eBay: it was worth £5 to bypass Comet’s red tape.

The dishwasher, however, has yet to become operational because neither Matchgirl nor me have the necessary PhD in advanced maths to understand the instruction manual. We’ll try again when she’s home from Shetland. Also unused is the oven, which Mr Electrician failed to bolt into place after connecting it. Mr Joiner (the boss) will do the necessary when he’s over to fix the splashback in place, whenever that it.

The induction hob, on the other hand, has had plenty of use; I recommend them highly. The only drawback, apart from needing a new set of pans, is that its shiny surface, like the acres of shiny new worktop we now possess, shows off muddy pawprints to perfection. And there are lots of them. First job every morning is to remove the traces left by inquisitive moggies who fail to wipe their feet after ambling around the garden.

To Matchgirl’s horror, some scuffs and minor scratches have already appeared. A new kitchen doesn’t stay new for long.

Comment from BikerMike at 07:03 on 13 December 2019.
You need to train your cats not to get up on the counters. I always worried abut mine getting on a hot hob and now I can leave a piece of salmon on the counter and they won't go up on it. This did entail much weeping, wailing, yelling, chasing and a water pistol. ;-)
Somehow I don't think MatchGirl would be in favour of this! :-))
Comment from Russell at 14:07 on 13 December 2019.
We'll never train them now – we've left it too late. And even if we could persuade them not to jump up while we're there, we'd still come down in the morning to find pawprints everywhere. They know who's boss.
Comment from Matchgirl at 18:56 on 13 December 2019.
It’s actually their house, and they just suffer us to live in it. (And water pistols are only reserved for cats who are eyeing up the Christmas tree!)
Comment from BikerMike at 08:27 on 14 December 2019.
Mine wouldn't know about Christmas trees. They've never seen one! Bah! Humbug! ;-)