Did You Miss Me?

It’s been a while (caused by lethargy rather than any dramas), and there’s still not a huge amount to report, so here’s a brief catch-up.

My athletic career continues to tick along, with the Yorkshire Marathon in 17 weeks, the Great North Run in 11 and the Leamington Spa Half Marathon in only two. My final pre-race long run was made yesterday, in unusual heat, and covered 12 miles in 2:05, so all is going well.

Race day strategy has still to be decided: run/walk, follow a pacer or just go for it. Let’s see what the weather does. At least, after finally facing a couple of local hills, I know I should be able to cope with the inclines on the Leamington course; fortunately the high point comes at five miles when I should still be relatively fresh.

The medal I hope to collect features one of the famous Leamington elephants. (No, I didn’t either.) However, I should pick up a fourth running award before that, next weekend, when three marathon medals will be joined by one for the inaugural Alness 5k, to be run the day after a gig and an 8-mile easy training run. So I won’t be out to beat my 26:54 5k PB, set last week. 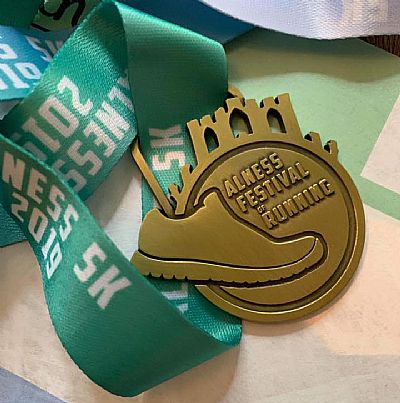 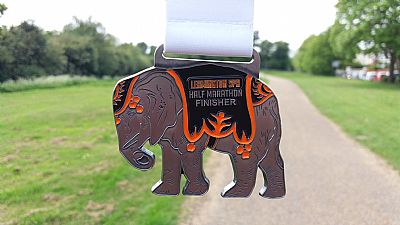 City Limits continues to prosper. I write little about our gigs because warts-and-all reports about some of them would not be politic if we wish for a long career as a wedding band. Fortunately I can say that last night’s, at Nethy Bridge, was one of the best: good sound, enthusiastic dancing all evening, a happy bride and groom, and a decent buffet. And we get paid for it. What’s not to like?

There is cat news, of course. The most recent drama was the failure of Pandora to come home for lunch and tea, sending Matchgirl into gloom and panic. This was resolved when I asked Lili next door to check upstairs, where she found a traumatised tabby curled up beneath a bed in a far corner. I enticed the intruder out and all ended well. It’s certain to happen again, though. Cats never learn.