Home at last, after another three-stage journey via Chez Richard in Leamington and the Redesdale Arms near Otterburn: both fine places to stay. The latest London Marathon medal hangs on the back of the bedroom door with my other bling and the day is already becoming a dream – or a nightmare for the unfortunates who finished after seven hours, bullied by clean-up crews. Not good PR for the organisers.

I was ahead of the drama, but only just. After finishing in 6:26 last year, then 5:48 six months later in Yorkshire, and having had decent injury-free training, I was confident that at the very least I’d set a new PB. My optimism was misplaced; I finished in 6:30:04, and much more tired than after last year’s heatwave.

I could blame the wind (I hate the wind), or being with more slow runners than last year (when I began at the less frenetic Blue Start, for ballot winners), or the fact that my promised Tower Bridge interview with the BBC didn’t materialise (I’d been looking forward to a brief halt to chat). Maybe it was Just One Of Those Days.

There were some positives: I finished; I ran (after a fashion) the final 500m and a few stretches after 21 miles; I needed no toilet stops; my finish time was for 26.97 miles compared with 26.4 last year (I must have zig-zagged a lot more this time).

Maybe I’d overtrained, Matchgirl mused later. If not, maybe it was time I abandoned the beginner’s get-you-round three-times-a-week training plan I’d been using and ran four times a week. I’ll give it a go when I begin preparing for the Leamington Half, to be held in July.

The Big Day began with early breakfast then a stroll to Victoria Station for the train to Blackheath, which seemed less crowded than last year. A good beginning. The Red Start, for charity runners, was found without problem, kit-bag deposited and throw-away top, bought the day before at Oxfam, donned to keep out a cool wind. The toilet queues were long but moved quickly. 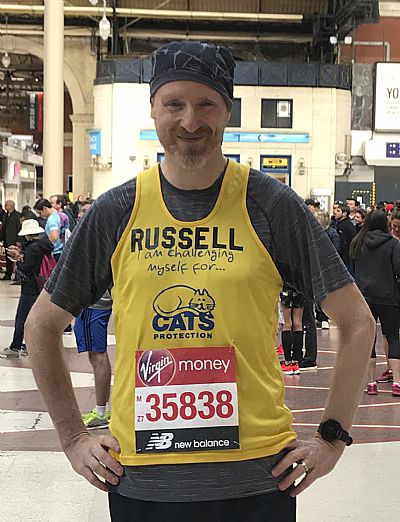 Red Zone 7 start, the slowest one, was found without difficulty. There I joined a lot more people than I recall being in the slowest blue start last year. I looked in pity at the unambitious slowcoaches around the 6:30 pacer, which was probably when The Running Gods decided that I was getting too uppity.

My breathing was good so rather than switch to 8:2 run/walk as planned I ran another couple of miles. Batman passed me, and Wonder Woman, but they’re superheroes so I didn’t mind. The crowds were great and the high spot of the course for me was when I passed a pub at around six miles, Queen blasting out of its windows, and raised a cheer by joining in with We Are The Champions.

After seven miles I switched to run/walk – not because I was flagging (I think) but because that was my plan. My pace fell but was still set for a good finish and stayed that way until Tower Bridge, not quite half way, which I reached in 2.5hrs. Then it all went wrong.

I slowed a lot around Mile 14, looking for Matchgirl in the crowd, then stopped briefly when I found her for a hug and encouragement, both welcome, but never really got going again. I wasn’t cold, although the gusts of cold wind bothered me a bit. Water was no problem and the gels were going down, with effort, so that wasn’t the problem either. Maybe I’m just a half marathon runner.

The pace continued to slow. I was overtaken by fat and skinny people, runners older and younger than me, but no one taller until The Man In The Big Pink Dress (6ft 6 plus bouffant hairdo), passed me on his regal stroll around the course. I did pass a few people but the ratio was not in my favour.

Around Mile 21 I received a talking-to from Matchgirl, who urged me to try to run despite my thighs feeling like blocks of wood. “It’s all in your mind,” she told me. I did, and got in a few brief trots, climaxing with a tottering run towards the finish line. This marathon was much harder than last year, in virtually the same time, but I finished and even managed a few smiles on the run-in and afterwards. Most photographic evidence has yet to become available so you’ll have to wait for proof. 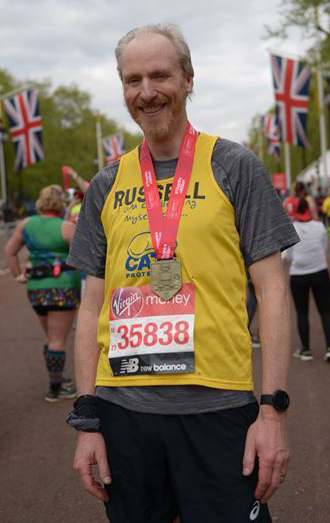 Afterwards, unlike last year, I had no appetite and no desire to stroll around to flaunt my medal. Cold is for training, I’ve deduced; warm is for running. I even called off the traditional post-marathon curry in favour of a late room service dinner – by when, fortunately, I was ravenous. Grilled salmon on a bed of spinach with mash and veggies. Superb.

Next morning, the legs were a little stiff but the twinges had stopped. By Tuesday the stiffness was all but gone. Today they feel as though the marathon had never happened, which suggests that Coach Matchgirl is right (which she always is, of course, about everything) when she tells me I need to improve my mental toughness. She also has pointed things to say about my core strength, such as I need some, and my poor upper body running technique. It’s not all in the legs, it seems. 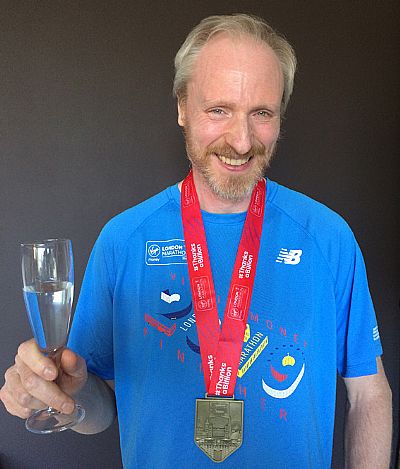 So that’s my third marathon completed, and almost £2,000 raised for Cats Protection. I’ll hit the target sooner or later. Perversely, I’m looking forward to my fourth marathon in October, back in Yorkshire, more than I was. “You learn more from your failures,” the sages tell us, so I learned a lot in London, especially not to take improvement for granted. I’ll do more runs, longer long runs, probe for my six-pack and search for mental toughness.

As for London, would I do it a third time? I entered the ballot on Tuesday, much to Matchgirl’s amusement. But if I don’t win a place the Limassol half and marathon are held a month earlier and the band is definitely not playing that weekend. A warm-weather run in Cyprus could be just the thing, finances permitting. Watch this space.