On The Road To Newcastle

It’s another one where you have to enter the ballot, and again I was lucky first time. There’s not the same volume of entered-ten-years-in-a-row-and-still-haven’t-got-in chuntering as there is with the London Marathon but there were a few disgruntled runners venting their spleen on Twitter.

There’s no excuse if they really want to do it, though. Twitter’s #GreatNorthRun hashtag is filled with charities offering places, most asking for only £300 in pledges, unlike the £2,000 I’m still trying to raise for my London place (£775 to go). Possibly more tricky is finding somewhere to stay for the weekend when 50,000 runners plus supporters descend on the area. If even half of them are locals that’s still a lot of beds to find. 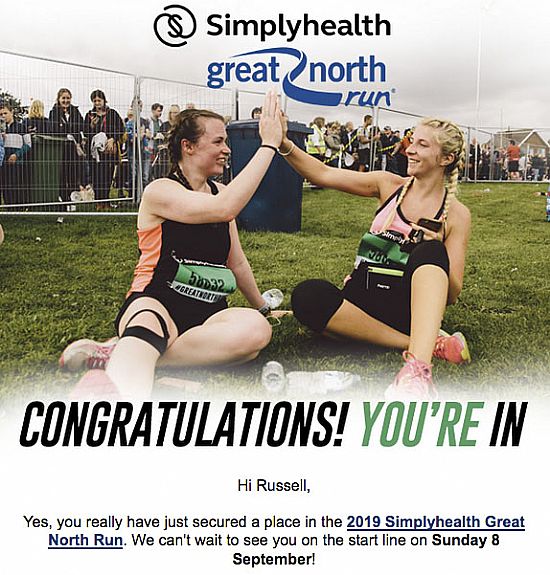 I was sensible. I booked a cancel-at-no-cost room when I entered the ballot, although even then the choice was dwindling. Fortunately I found a reasonable-looking place in Jesmond, not far from the hotel where I stayed to see Yes (which was fully booked) and handy for the Metro to the city and back from South Shields.

Matchgirl has still to decide whether she’ll accompany me to Geordieland, the sheer number of people involved, all crammed into a small area, not being to her taste. (And there’s cat care to consider too.) It’s not much to my taste, either, but I’ll take a chance just so I can say I’ve done it. It might be as brilliant as London was. And it fits just right into my Yorkshire Marathon training.

Today’s London training saw me run nine miles (no walking) the day after six miles of intervals. The forecast for the next few days is awful so I’m taking no chances. Matchgirl, who’s tougher than me, runs tomorrow whatever the weather. She’s a proper runner.