New Friends For The Pride

Change is taking place on the edge of The Rural Retreat’s broad acres. A new neighbour has brought with her two children, a rabbit with the grandiose name of Callum Stewart Mackenzie, and an ageing ginger tom with the equally grandiose name of Perseus, known more familiarly as Percy. Willow has already made his acquaintance in a staring competition that ended in a no-score draw. What The Pride will make of Callum, who has an outdoor run, remains to be seen.

Warnings have been issued about Maia’s predilection for sneaking through unattended cat-flaps to carry away trophies from waste bins.

In the good old days the rabbit run would have needed to be predator-proof but we seem to have been deserted by pine martens, who aren’t even seen by the Bushnell now, never mind in person in the daylight. As I don’t know how badgers and rabbits get on I’ve mentioned our evening visitor, just in case. 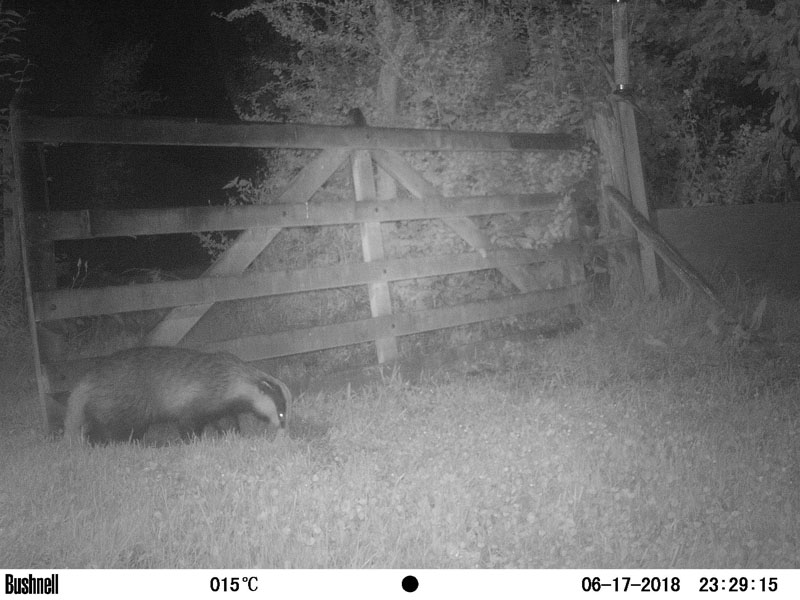 Brock is a reliable presence at around 11.30pm (as recent snaps prove) and sometimes around 2.30am, which is unfortunate for him because that’s probably the time I’ll arrive home following City Limits gigs on Friday, Saturday and Sunday. Also recently captured by Bushnell, but not at a quality worth sharing, were a foraging hedgehog and a small grey cat striding purposefully towards the cottage with a vole hanging from her mouth. I found the corpse this morning beside my armchair.

Athletic Update: Monday’s easy run, my first in a week, was completed without incident, as was today’s tempo run (despite a 10-minute downpour in the middle). On Friday I’ll attempt to extend my fully run distance to eight miles. T’ Yorkshire Marathon takes place 16 weeks on Sunday; training will soon get serious.