My fears of a four-week running lay-off may be unfounded. My calf muscle seems almost normal today, despite – or maybe because of – the trek up and down Sauchiehall Street in search of Ibis. There’s still a slight swelling and some stiffness which Matchgirl assures me is to be expected because of lack of use.

If I didn’t have Chatterbox to distribute tomorrow (and, more truthfully, if the Siberian winds were not forecast to be just as bad) I’d try a short test run then. Instead, I’ll wait until Friday. If all goes well I’ll do the same on Saturday and try a long run on Monday to get me back into the training programme.

I’ll need to be creative regarding the rest of the programme because I’m now two weeks behind. The longest run to come is 18-20 miles in 3.5hrs. If I can do that and have a couple of weeks to ease off (known as the taper in runnerspeak) then all should be well. I won’t be the only starter with an incomplete training programme behind them.

Matchgirl, who’s made of much tougher stuff, braved wind and snow this morning to complete her latest run, preparation for the mini-ultra (a mere 30 miles) she’s running near Edinburgh at the end of March as a warm-up for the 62-mile London-Brighton run in May. She ran in Glasgow yesterday too. It takes all sorts. 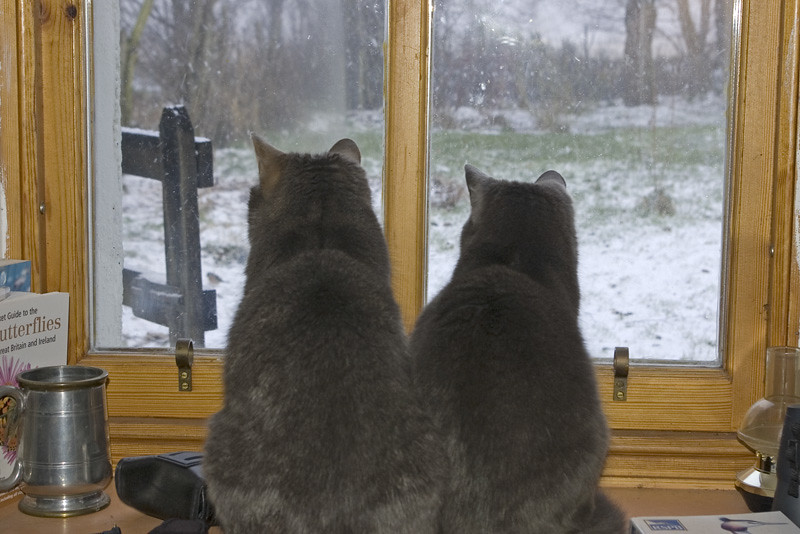 The Rural Retreat has so far been spared heavy snow but cats were taking no chances today. Warm shelves and radiators have been popular snoozing spots when their occupants weren’t taking a peek to see if conditions had improved. Cats never run unless they have to.