Aid From The Running Gods

The Running Gods are either looking after me or lulling me into a false sense of security. Last night the wind blew and rain poured so heavily that Matchgirl and I went to bed wondering if we’d wake to discover the downstairs under six inches of water. The garden was the most flooded I’d ever seen, the sandbags protecting the front door on the verge of being overwhelmed.

Yet, despite more rain on and off during the night, the morning revealed an extremely soggy but flood-free garden. A good start. And better was to come.

The morning forecast was for rain, cold and wind, so I prepared for the final Week 5 run with foreboding. I was lucky. Cold and windy it was, although my chosen route kept me mostly sheltered, but the rain held off until I’d completed my allotted two 25-minute runs split by a two-minute walk. I even added a final two-minute trot – uphill, into the wind – to round up the distance to five miles.

The only down side is a sore hip, although that might have more to do with Willow’s domination of the bed than running. When she’s decided where she wants to be, that’s it, and humans have to fit into whatever space is left.

This is a bit of a nuisance. Week 6 – The Week When Training Gets Serious – begins on Wednesday morning, for which 2ºC, sleet and 20mph wind is predicted. I could bring the run forward a day but hip recovery might be a better idea. The forecast is slightly better for Wednesday afternoon. I’ll trust in The Running Gods. Or run on Thursday. 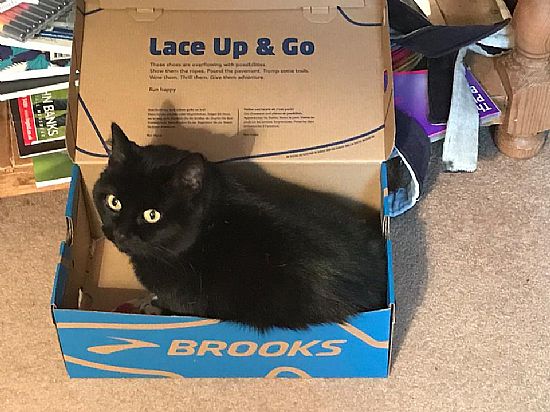 My running shoe box continues to draw Maia into its comfortable interior. It’s good to see her happy.