Kawasaki San’s trip around parts of the North Coast 500 coincided with some wet weather, some sunny weather, and some Biblical downpours. The worst, by happy chance, coincided with the group’s occupancy of a table in Beauly’s Corner on the Square, from where we watched rain bouncing off the road and ordered more tea and cake to pass the time. How we came to be in Beauly is another story…

My trip began on Wednesday, in the rain, when I rode to Dingwall to meet Richard, Mark and Colin outside the railway station, which seemed a handy landmark for visitors unfamiliar with the town. I was last there, and found the gang had discovered Tina’s Tearoom. Typical bikers.

The rain had stopped by the time we departed for John O’Groats, with another tearoom stop en route, at Laidhay, near Dunbeath. We deserved it – the low cloud at Berriedale was as thick as fog. At JOG, after the obligatory signpost photostop, there came more tea and cake, then a restrained cruise along the north road to Durness, slowing along the way for Mark, who’d never been so far up before, to catch up after taking photos.

Accommodation (pre-booked by Richard) was in a room of the former barrack huts run by the Scottish Youth Hostel Association: clean, warm, pleasant (when we’d got indoors away from the midges) but spartan – the rest of the clientele were walkers, cyclists and other hardy types who spurn comfort. Fortunately the Smoo Cave Hotel was a short walk away and served good food and drink. Man cannot live by cake alone. 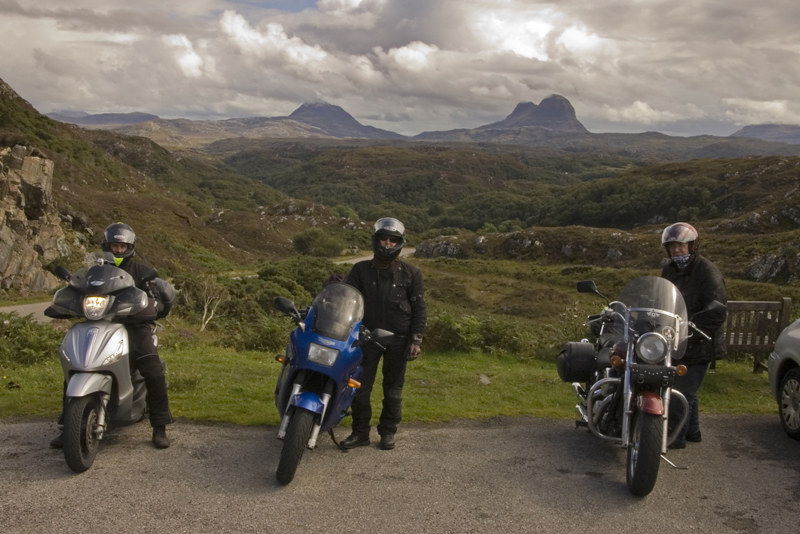 Mark, Richard, Colin, and some dramatic Sutherland scenery. I may have overdone the post-processing of the clouds.

The evening was made memorable by a power cut which rendered Colin’s bedtime breathing machine inoperable. Working, he sounded like Darth Vader; not working, his breathing became a deafening succession of snores, grunts, rumbles and the sound of a septic tank emptying. Little sleep was had.

Next day, after a bleary breakfast, we headed south along the west coast through the best weather of the trip. More cake was consumed outside Kinlochbervie, tanks filled at Scourie, and waterproofs donned outside Unapool, where the one-legged rain dance satisfied the rain gods and meant we needed them for only five minutes. A short circular detour took us along twisty single-track roads almost to Stoer, then back to the main road and lunch at Lochinver Larder. The pork, chorizo and manchgo cheese pie was worth the trip on its own. 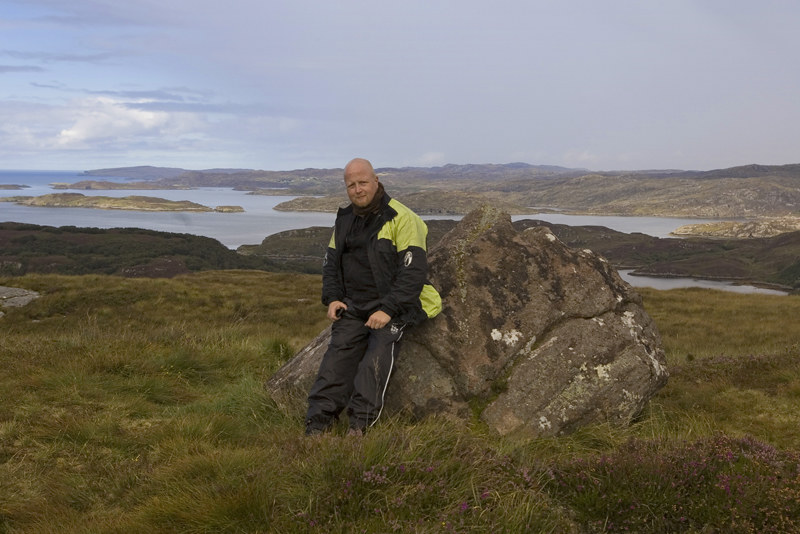 Richard takes a break on the road to Stoer.

Refreshed, we completed the day’s journey via Ullapool, Aultbea and Poolewe, finishing at the much more salubrious accommodation provided by the Loch Maree Hotel. The midges were still a force to be reckoned with, though. Compensation was two twin rooms, with Colin and Richard staging their snoring competition in their own.

The final day was when our plans fell apart. Our original route was to sneak up on Applecross from the flat side and leave over the mountainous side, then continue down to coast road through Lochcarron and Stromeferry to Kyle of Lochalsh, whizz down the A87 to Invergarry then on to journey’s end at Fort William. But, I remembered at the last minute, the Stromeferry road is closed for yet more repairs.

We set out for Applecross anyway but were driven back by torrential rain – there’s no point going there if we couldn’t see the scenery – so Plan C came into play: back to Kinlochewe then east via Achnasheen in search of better weather.

We found it at Tarvie – another tea and cake stop where Richard caused much derision by buying a North Coast 500 T-shirt. The size (medium) occasioned the scorn, not the shirt. 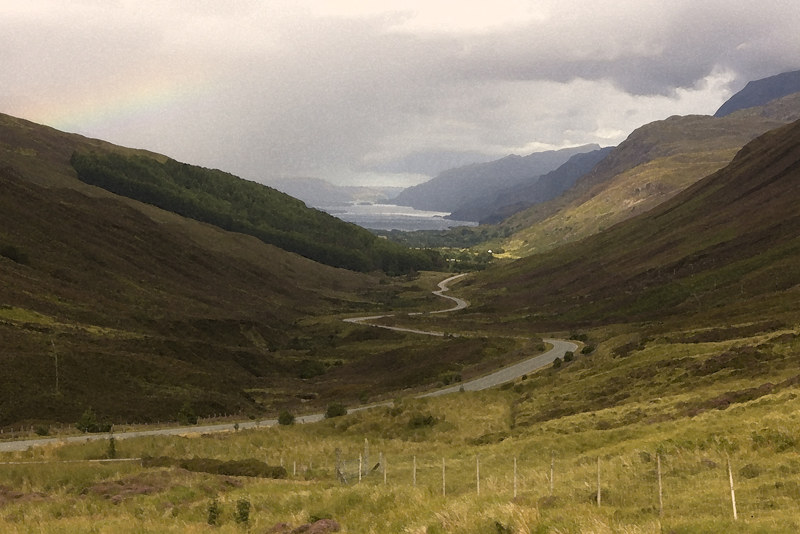 The Loch Maree road, made into a watercolour with Photoshop.

As I was back on home ground, from there I led the group to Loch Achility and the twisty roads across the hydro dams to Strathconon on the other side. We’d definitely escaped the bad weather, and celebrated by dining in one of Matchgirl’s favourite eateries, the Corner on the Square. Shame she wasn’t with us, although just as well when the monsoon started.

Our extended stay in the cafe I took as fate telling me to return to The Rural Retreat, which I did. Matchgirl appeared moderately happy that I’d returned early. Cats didn’t care, especially as there was at least one hidden mouse taking all their predatory interest.

Next day I learned that part of the road after Achnasheen had been closed following inundation by floodwater and accompanying debris. A close escape.

Cathy Update: The Pentax was also out when Matchgirl, Cathy and I visited the Cairngorms during Cathy’s stay. Here are some souvenirs for her. Haste ye back. 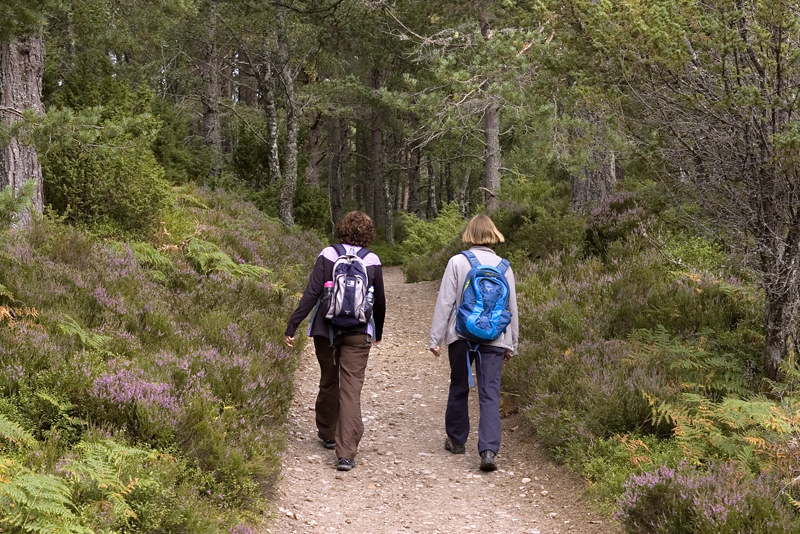 Matchgirl and Cathy stride through the scenery. 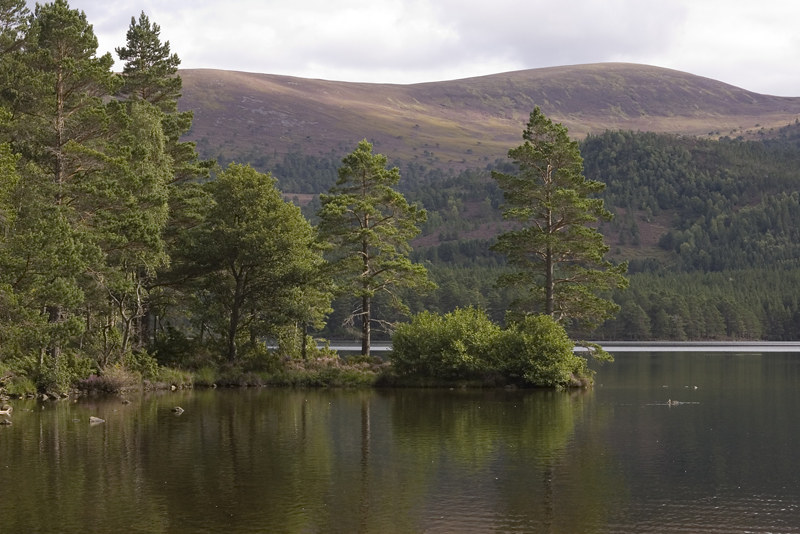 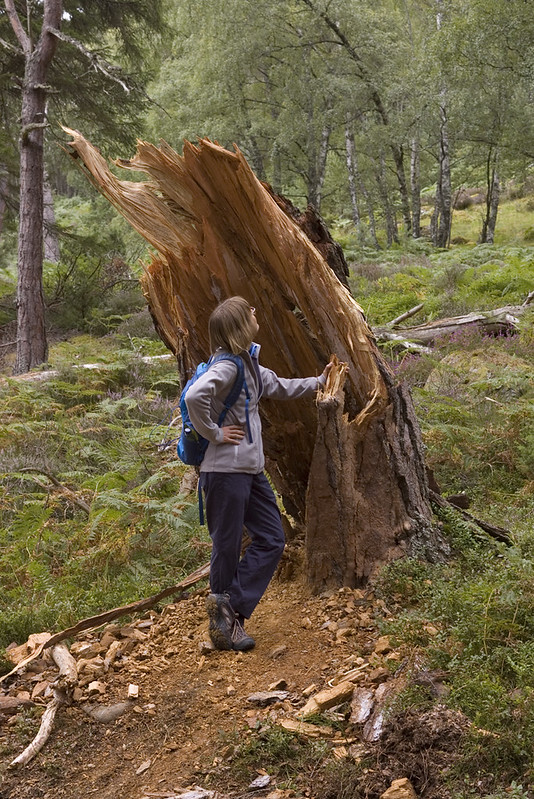 Cathy loses her temper with a tree.