A Traumatised Tabby And A Profane Plumber

Day Three of The Great Heating Makeover: The strain caused by the upheaval is beginning to tell on Pandora, who left The Rural Retreat after breakfast and failed to turn up for both lunch and tea.

The first sign of her return was more than twelve hours later, when Matchgirl and I came home from my belated birthday treat at Cafe India in Dingwall. A sad peeping alerted us to a tabby presence in nearby foliage but it was a minute or so before Pandora put her head above the grass and a few more before she felt brave enough to tiptoe past the plumbing debris that litters the garden and into an equally littered cottage.

Biscuits came first, then some bedroom pampering by Matchgirl. How she’ll cope with two more days of upset remains to be seen.

The strain is also beginning to tell on Mr Plumber. After many hours and two broken drills he abandoned his sweary attempt to breach the wall between outhouse and kitchen, the hole less than halfway through, and started again higher up in a bid to reach the computer room.

This proved more successful. It also involved the removal of another chunk of false wall, but the historic wallpaper exposed upstairs was a boring white. I’ve revised my estimate of the age of the kitchen paper to 1950s – sixty years old. Or maybe more.

Progress today: the boiler is connected to the oil bunker and surrounding ground almost reinstated; the pipework inside the outhouse has grown; one living room radiator has been removed and its replacement propped up against the wall. Most dramatically, the Rayburn was hauled outside on two slings by four struggling men (including me) and on to a trailer for subsequent disposal. Decades of back-of-Rayburn filth was mostly removed. There’s still much work to do.

What’s left (not necessarily in order) includes installation of two radiators and more piping; removal of redundant pipes; installation of electrics and boiler control; removal of concrete Rayburn plinth; making good, tidying, removal of junk from garden and showing us how to operate our wonderful new heating and hot water system. They’ve got two days to do it. We’ll see. 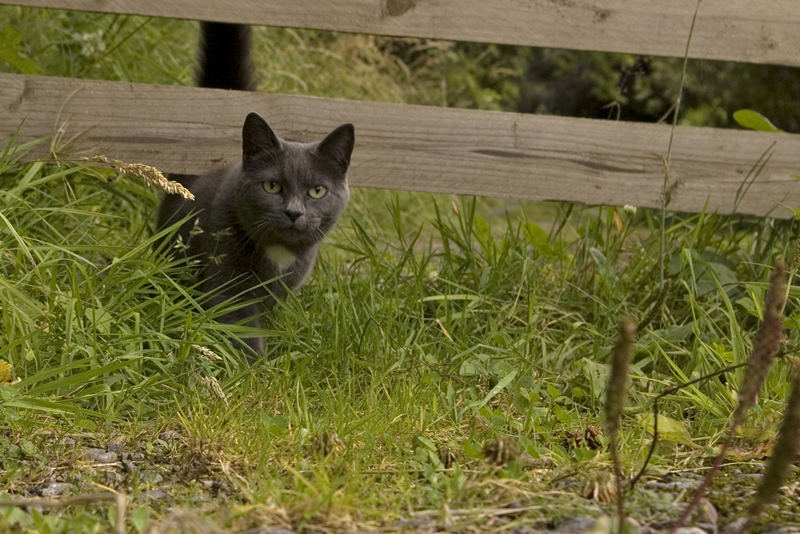 Unlike the traumatised tabby, Maia and Willow have coped with the intruders: Maia by mostly staying home on guard, Willow by bobbing in and out all day to make sure that all is well. She was perky enough to capture a siskin and a mouse this morning (both rescued and released unharmed) and take a short stroll this afternoon, when her latest portrait was snapped.