Day Two of The Great Heating Makeover: Mr Plumber, his lad and added muscle arrived today around 8.15am for another busy day of drilling, sawing, digging, hammering and generally annoying cats.

Drilling has been a particular problem for the team because between the sandstone which comprises the inner and outer skin of The Rural Retreat’s walls is a filling of rubble, some of it flintstone. This, it turns out, is very tough going for drill bits. Yabba dabba do.

Despite that, progress is being made. Our boiler now stands proudly on its outdoor plinth; pipework is beginning to snake across the outhouse walls to connect with sinks, bath and radiators; the cistern and associated plumbing has gone from the computer room and now litters the garden; the Rayburn’s removable parts have been removed and the rest will be hauled out of the cottage tomorrow when even more muscle will be employed. Fortunately I’ve not been invited to help. 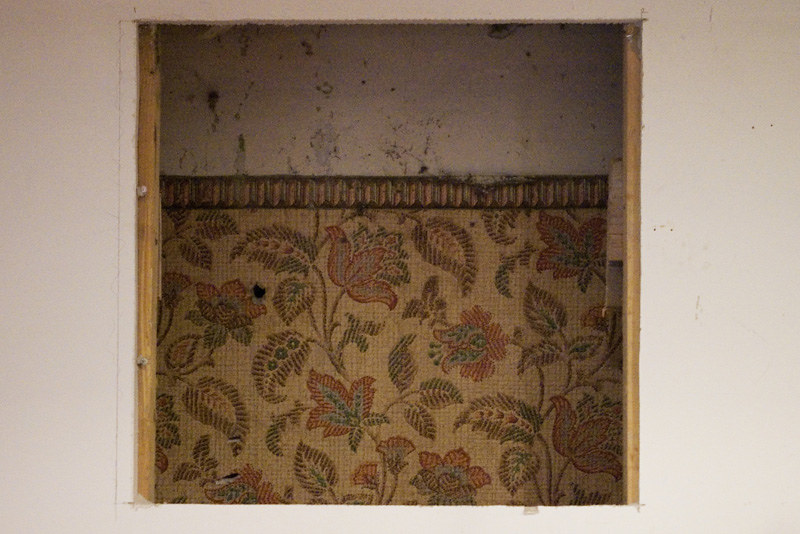 The wallpaper discovered after a hole was cut in our kitchen wall.

Of greatest interest to me is the old wallpaper revealed when a chunk was cut out of the false wall in the kitchen for an as yet unspecified purpose. I’ve no idea how old it is but suspect it was there before the room was turned into a kitchen, which could be forty years ago. 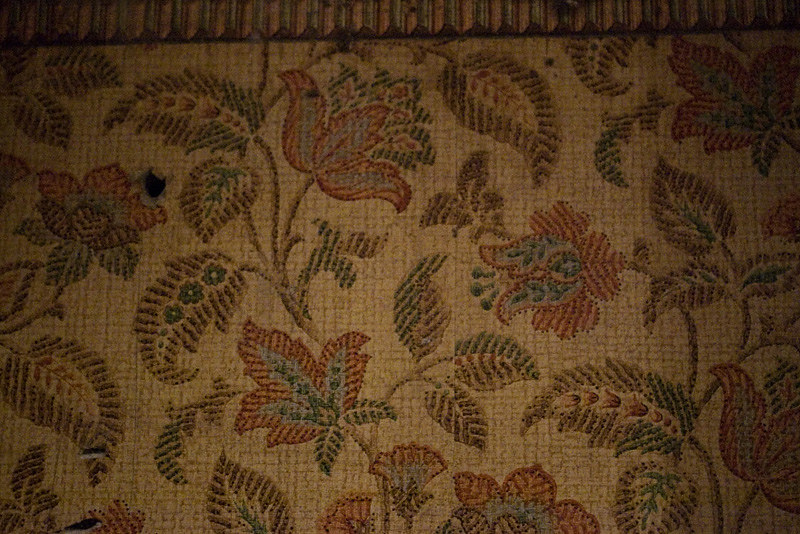 A closer view of the paper which must be at least forty years old.

Of greatest interest to Matchgirl is the space left behind by the cistern. She’s already planning its conversion into a combined wardrobe and shoe repository. Happy days.

Not so happy was the evening when we drove to Inverness to see Mark Steel’s Radio 4 show recorded at Eden Court and never left the car. Looking for space in the car park we were informed that would-be audience members were being turned away because more tickets than seats had been issued and they were all now taken.

The BBC must follow the airlines in overbooking to compensate for no-shows. At least, to my knowledge, no-one was manhandled from their seat. I’d taken little notice of the large-print disclaimer at the bottom of the ticket which warned that “The ticket does not guarantee admission”. You live and learn.