All Set For Winter

Blame me for the bad weather. Not only is half the grass cut (it only took three hours) but today Kawasaki San was serviced ahead of what I hope will be his first decent-mileage year following five embarrassing ones. After several springlike days there’s now rain and talk of Arctic blasts with snow on low ground. No two-wheeled tours just yet then.

At least The Pride was able to make use of the newly levelled (although extremely tatty) lawn today. Maia was soon back inside but Willow and Pandora enjoyed some scampering and leaping after toys thrown by Matchgirl. The Pentax caught our tabby athlete in mid-air, although the snap’s nothing brilliant. I hope to get better ones in the future. 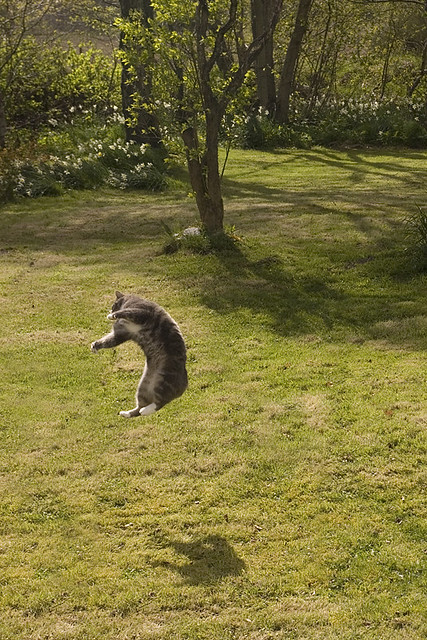 I resisted the temptation to Photoshop a ball into the picture.

Matchgirl will do scampering of her own tomorrow when she competes in the Balmoral 10K. I’d go along to show support but wouldn’t be back in time for City Limits’ ladies’ night gig in Elgin, so my solidarity’s been limited to sharing her pre-race carb loading: two Sutor Creek pizzas. (That’s one each – not two for her.) 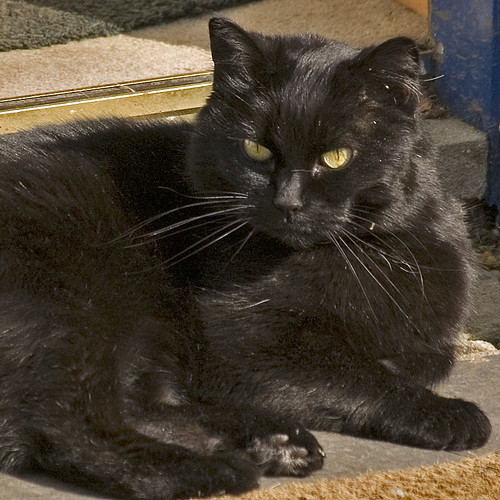 Maia in less active mode a few days ago.

Looking further ahead, the programme for The Year of Entertainment has been boosted by bookings for two at Eden Court for Hayley Mills reading (a presumably trimmed version of) Pride and Prejudice, John Bishop and Jeremy Hardy, and for one (because Matchgirl’s away) for the Tommy Cooper story. Light bulb, heavy bulb. Just like that. It will be great.