The end of work on the next Chatterbox is in sight – one interview to do tomorrow and half-a-dozen pages left to lay out before the Black Isle’s favourite formerly award-winning magazine begins printing in time to hit the shops on March 1st. It promises to be another bumper edition.

Production was only slightly hampered by my layout work on a book by children’s author Pauline Mackay, to be published by her company Ablekids. A publication date for Kitty’s Scottish Safari has not yet been set (as far as I know) but it will be sooner rather than later.

Chatterbox continues to be laid out with QuarkXPress but Kitty was the first book I’ve created with InDesign, which until recently I’d not used since passing for the last time through the grim portal of the Great Northern Media Empire, several years ago. Fortunately, most of the knowledge came back. 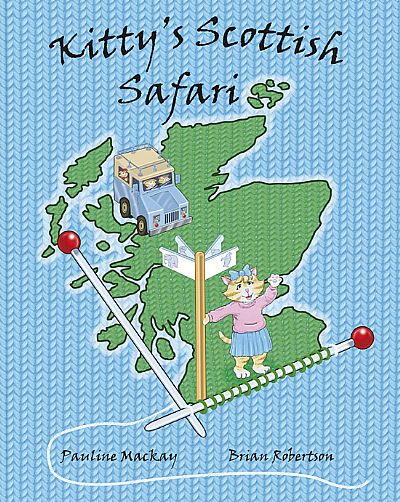 The first book very quickly became the fifth because, while Kitty may be only 32 illustration-heavy pages, it will also be published in Scots, Gaelic, French and German. The proof reading was someone else’s responsibility.

It’s the tale of a family of knitting-mad ginger moggies and their tour of several prominent Scottish animal statues. The kiddies will love it.