What Every Bride Wants

City Limits might have a busy future in the wedding industry. Last Sunday, Jenna and Keith represented the band at the Moray Wedding Fair in Elgin and played a few tunes for would-be happy couples. The organisers didn’t fancy the whole band blasting out, which was a shame, but the results look promising nonetheless.

There was lots of interest in what we have to offer, many brochures were handed out (we’re doing this properly), and many email addresses taken. Jenna’s even building a database. Enquiries have now been received for dates as distant as 2018, so some couples are really planning ahead.

One thing we’ve still not got organised is the optional thirty-minute live ceilidh set. This shouldn’t be difficult, as it will involve fifteen minutes of playing and fifteen of watching the crowd faff around and being told how to dance the steps. However, as we’ve so far got only two tunes half learned, and our ceilidh set debuts in just over two weeks, there’s some work to do.

Tomorrow’s rehearsal should be interesting. 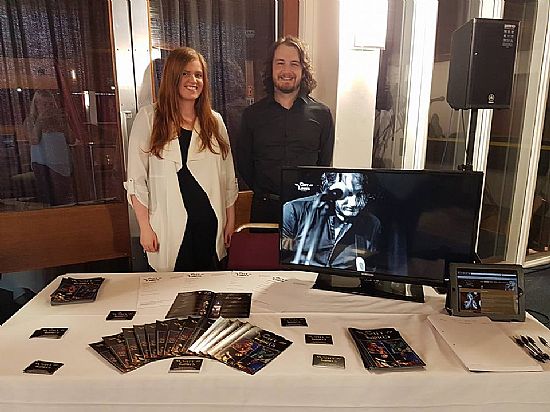 Jenna and Keith set out their stall at the wedding fair.