They said the day would never come. They said the wrench would be too great. They said there'd be a last-minute change of heart. They were wrong (whoever they are). Today, Matchgirl disposed of surplus shoes.

And not just a couple of pairs. She culled her collection with amazing ruthlessness, putting at least half of her trainers and around a third of her other footwear into either the bin or recycling bags, depending on their state of wear. Not many went in the bin.

Not many still fit her. This isn't down to reckless purchasing (mostly) but the increasing broadness of feet shaped by her pursuit of marathon glory. That's her story, anyway.

I'd expected tears, but unless they were shed in secret she carried out her purge with a determination that would have impressed Stalin. Boots, dress shoes, sandals, casuals, heels – nothing was spared. The result is that the allotted space at the top of the landing now looks like a shoe-lover's paradise, rather than a jumble sale, and the fitness section underneath the stairs is displayed in tidy rows rather than an unkempt heap. 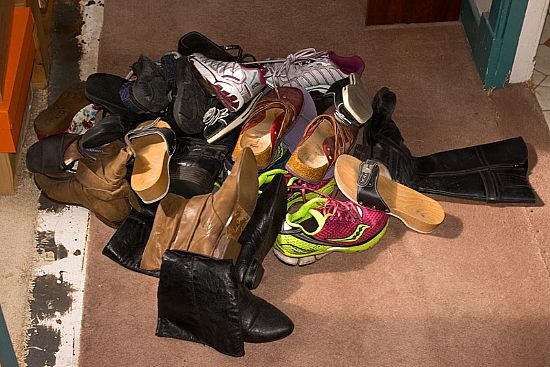 Just part of the footwear collection that's destined for a new home.

But what has brought about this shoeicide, I hear you ask.

I may have set things off by carrying out a much-needed dejunking and sprucing up of the office/spare bedroom, partly inspired by the forthcoming visit of Leamington Richard, who'll spend a few days with us from Monday. Not that he'd care, being a proper bloke.

More pertinently, lapsed snapper and full-time running goddess Cathy comes to stay a couple of weeks after that. What a bloke doesn't notice is unlikely to escape the keener eye of a woman. Especially when she's from Cheshire.