New recruit Jenna was in Nairn last night, playing one of her remaining solo gigs, so the City Limits trio squeezed into the band Transit for the trip to Kyleakin and its debut at the King Haakon Bar. Sam, who doesn't get out much, was almost as delighted by the scenery as he was by the complimentary meal provided by the management on our arrival. Fish and chips have never been so good, it seems.

However, the pre-gig highlight was the sunset behind Skye Bridge, captured on Keith's phone because the Pentax doesn't usually accompany the band. The trip would have been worth it just for that, but fortunately the gig turned out to be a good one. The crowd was happy, the management was happy and so was the band, even after lugging the gear through the crowd of smokers outside the back door. 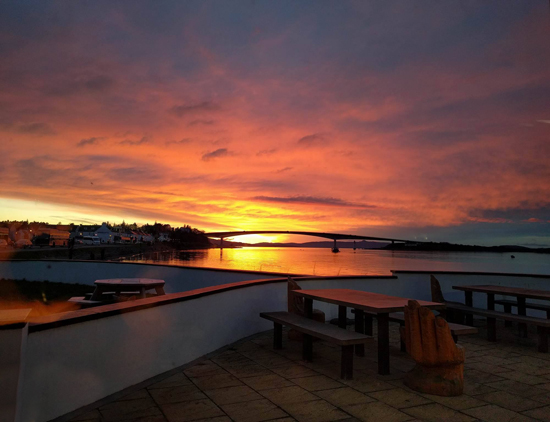 Skye Bridge, snapped by Keith through the bar window

We'd declined use of the Bar bunkhouse, which in retrospect may have been a mistake, and drove home the same night, dodging deer along the way and planning an exciting future for The Best Band In The Highlands. Prospects look good, even after a night's sleep that began at 3.30am. Life's tough as a rock star.