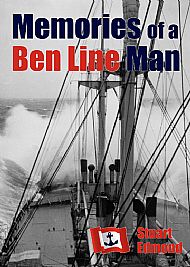 Bassman Books was definitely over-cautious with regard to the first two print runs of Memories of a Ben Line Man. The initial two hundred copies sold inside a month; the second two hundred has sold almost as quickly. We now have just a handful left, and today, the day after Picaresque in Dingwall took delivery of its fourth top-up, we received an inquiry from another bookshop keen to stock Stuart's opus.

A big write-up in The Orcadian (yet to be seen by me or Stuart) may explain the interest of Stromness Books and Prints. The Orcadian Bookshop in Kirkwall already has an order on the way and Waterstones in Edinburgh made cautious contact last week.

Which means it's just as well that a week ago we went for broke (hopefully not literally) and ordered a third print run – of a thousand copies. Gulp. So if you've a maritime bookshop, museum or similar round your way, let me know. That's a lot of books to sell.