Be Careful What You Wish For...

For weeks, Matchgirl's dreamed of snow and a cold, crisp, windless day when she could run through it. Today was that day. And it was great, all the way through the first five miles of her ten-mile woodland run, right up until the moment when she tripped over a snow-covered tussock and crashed to earth.

Anyone else would have made their way to the nearest road and phoned a willing husband to collect them. Matchgirl, of course, completed her run with two aching fingers wrapped in a snow-filled plastic bag then drove home where she pondered the wisdom of a trip to A&E.

NHS24, after ten minutes spent sorting out her postcode, suggested she probably should go, so not long after that I made a twenty-mile mercy dash with Matchgirl in the passenger seat, nursing her hand and bemoaning the cruelty of fate (which yesterday had cast The Best Boots In The World before her).

Despite Jeremy Hunt's claims that no-one in the NHS works at weekends she had to wait only five minutes before being whisked into a back room. She emerged some time later with the news that she had broken two fingers. More bemoaning and railing at the world took place. A while after that, a cheerful nurse encased the ring finger and middle finger of her left hand in plastic splints and swathed them in sticking plasters. Fortunately, Matchgirl had had the foresight to remove her ring, in anticipation of swelling to come, before we left home. 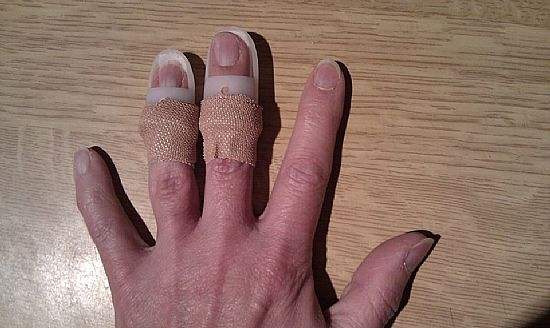 Even more bemoaning happened on the way back to The Rural Retreat despite sympathy and observations that much worse could have happened. "How will I type?" she wondered. "How will I wash my hair?" for the plasters must be kept dry. She did brighten a little on discovery of the silver lining – for the six weeks it will take for her fingers to heal she'll be excused washing-up duties.

Her biggest fear was that months of personal training would go to waste. However, Kim (the trainer), assured her that there were still many ways she could be tortured, especially when Matchgirl let slip that the plastic bag she filled with snow had earlier been filled with energy-giving Haribo Tangfastics. All those colourings and additives – tut tut.

Comment from Soo at 10:28 on 18 January 2016.
Matchgirl would have no luck at all if it wasn't bad. I hope her fingers mend quickly, give her my love.
Comment from Russell at 14:30 on 18 January 2016.
She did meet me. So maybe you're right.
Comment from Matchgirl at 13:17 on 20 January 2016.
Thanks, Soo! I had the good fortune to find The Boots of Great Beauty at half-price and to be married to someone who (so far) has cheerfully done the washing up and who cuts up my food without laughing at me, so my luck isn't all bad!