A Break In The Sun

The last couple of days have been filled with proofreading the next masterpiece to be published by Bassman Books: Memories of a Ben Line Man by Stuart Edmond. All that remains to do is make the corrections, let the author take a final proofread, then prepare the pdfs for the printer. With luck, Stuart's 1950s Merchant Navy tales will be in the shops next month.

So I took the afternoon off and led The Pride on a walk up the lane to the decrepit nearby steading. Blue sky, warm, windless – I should have cut the lawn but cats expect top treatment.

The wander was worth it, for over the wall at the back of the old cart shed were two huge, lethargic pigs, sprawled in the sun. Maia and Willow were transfixed. Much time was passed crouched on the wall, staring at the recumbent porkers. They'd clearly never encountered such beasts before.

Pandora was less interested. Either she had better things to do or she'd seen them before during her solo explorations of The Rural Retreat's environs.

I tried a few snaps featuring both cats and pigs but none worked, so here's a portrait of Pandora, taking a break yesterday while hunting in another field, and a backlit Willow on the wall today in dramatic monochrome. 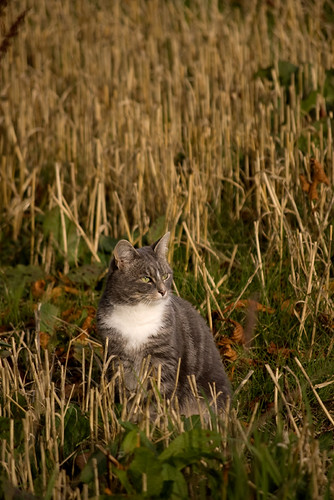 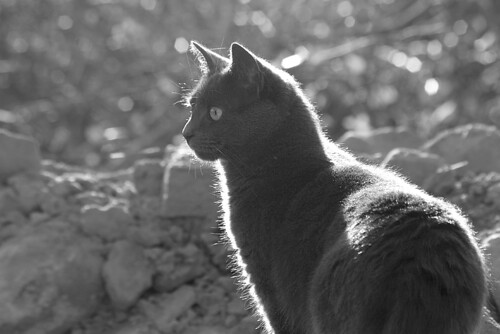